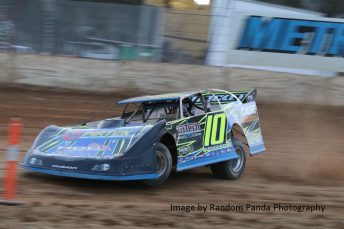 The season kicked off with a ‘Bang’ on Saturday night at Alexandra Speedway with spectators treated to the fastest ever laps of the big Alexandra Speedway when Healesville based competitor Cameron Pearson smashed the old track record by more than half a second as he motored his way to a big win in the ‘Healesville Directional Drilling 1000’ Late Model Sedan feature event.

On a big opening night a number of new competitors had their first race meetings whilst a couple of veteran drivers finished at the point ends of their fields. David Donegan and Aaron Meakins won the Sports Sedan and Standard Saloon finals respectively whilst Lenny Bates (Street Stocks) Ricky Cornwall (National Juniors A Grade and VSC Juniors) and Rhys Meakins (National Juniors B Grade) were the other winners on a sensational night.

The Late Model Sedans were trying a new format where competitors time trialled to determine starting positions in heat one with a reverse grid in heat two and straight away in the time trials, there was a bonus put up by ‘Metro Tow’ for the driver with the best lap of the night in Late Models as long as it broke the old track record, Pearson made his intentions clear when he cracked his father’s old track record in the trial.

At this point the new record was still in the 17 second record range. Come time for heat one Pearson blew that record once again setting a time in the 16.9 range on his way to a win ahead of Chevy Edwards from Eildon and Mat D’Annunzio from Canberra.

Then in the second heat Pearson recorded a new track record of 16.878 to get the crowd up on its feet once again. Pearson led to the line another Alexandra club racer Tim McPherson and Graham Forte finished third.

Finishing the night for the Late Models and race fans was a twenty five lap feature event chasing the $1000 to win on offer with Pearson and Edwards starting at the front of the field. Pearson quickly moved to the front and started the task of carving up the race track as he ran down back markers and worked his way through to overtaking some of those up towards third place.

McPherson who at the time had not been lapped and was sitting in third, lost oil pressure in his engine and pulled infield relinquishing the spot. Pearson continued on strong and smoke started to come from the Edwards car, potentially if the race had of gone on any longer, Edwards too could have finished up infield. Pearson greeted the finish line as the winner, with Edwards, D’Annunzio, Forte and Kristin Vermeulen from New Zealand finishing as the top five.

Lenny Bates and Aaron Meakins won all their qualifying races in the Street Stocks and Standard Saloons respectively before both going on to win their finals. Bates defeated Eugene Bennett, Lee Beach, Wayne Sheerman and Colin Campton, whilst Meakins took victory in front of Sarah Meakins (his wife), Tom Kuhne, Debbie Jones and Cory Horter.

In the Speedway Sedan Australia Juniors A Grade division or National Juniors to point out the difference in other classes, there were three heat winners across four heats with Tim Gorski then Ricky Cornwall twice and Courtney Meakins in the final heat taking out the wins.

Cornwall then started his season in the best way possible when he picked up the win over Gorski, Meakins, Jade Moule and Ally Morrison.

In the B Grade group, Rhys Meakins with two and Luke Cornfoot with one win had a battle through each of the three heat races. In the final Cornfoot whilst trying to make a pass on Meakins found himself in the concrete wall when he moved up high to try and find away pass.

Later, Seth Sloane also in the same spot went to make a high line pass on Sharlotte McPherson who had track position as she came out of the fourth turn and the two connected and Sloane ended up hard into the wall. Sloane was ok, his car was not and McPherson sustained some bruising and will be alright. Meakins went on to from Breanna Simpson and Chloe Sheerman with all of last season’s racers in the B Grades showing signs of improvement.

The very competitive Sports Sedan class competed in four heats with each driver racing in three of those and wins went the way of David Donegan, Matt Stampfli, Dale Smith and Paul Allen who drove a smart high line race on dry track as his fellow competitors slipped about on the wet part of the track after a track watering. Donegan actually crossed the line first in this fourth and last heat; however the stewards had deemed he began the race passing underneath the pole line of the track.

Donegan hit the lead of the feature race as soon as the green flag dropped and he was chased right through by Stampfli, however Donegan held his nerve and brought in a long overdue feature race win with Stampfli second and then Shane Kruger, Steve Kershaw and Dale Smith rounding out the top five.

Finally the Victorian Speedway Council Juniors results seen a clean sweep of all three heat races and the final going the way of Ricky Cornwall who had also competed in the National Juniors A Grade for the evening, Cornwall defeated Jack Brudenell in the final with Jake Rosser, Connor Donegan and Harry Orme making up the top five.

Racing returns in November with a big Sports Sedan feature planned and all club classes.