Head to Drouin Speedway for a smashing good time

Head to Drouin Speedway for a smashing good time 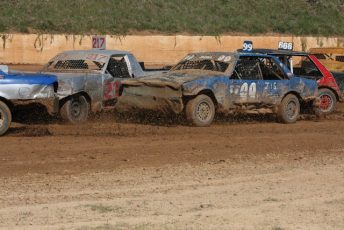 MEDIA RELEASE: This Sunday Drouin Speedway fires up with the first meeting of their season headlined by a sensational thirty four car field in the Crash & Bash that includes Steve ‘Goose’ Young & Nathan Taylor both former Crash & Bash champions that have had big victories down Jindivick Road.

Plenty of competitors from the South East of Melbourne are entered with Pakenham resident Damien Miller, Craig McKendry, Dale Morrison from Officer & Adrian Brown from Cranbourne among those ready to cause carnage.

Crash & Bash race drivers usually reserve their best action for the all in final where fast cars try to dodge and weave and push & shove others around them & those back in the back just try to throw a spanner in the works by bending a panel or two on as many cars as they can.