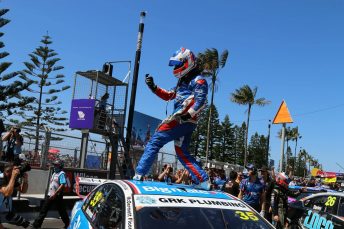 Todd Hazelwood has claimed the 2017 Dunlop Super2 Series, after taking the final race win on the streets of Newcastle.

The Bigmate Racing driver clean-swept the weekend, taking both race wins and pole positions for the round.

This year’s season was Hazelwood’s fourth year in the series, with the title a ‘dream come true’.

“Four years of work to get to this point, we came into the weekend thinking we had a tough job ahead of us, so we just kept our heads down and just pushed hard all weekend.

“It’s the ultimate reward. I said [to my family] in 2014 that we would achieve this.

“Obviously it’s well-documented how incredible my family have been to get me to this point, we’re not the most financially well-off family, but damn we are probably the hardest working and have stuck together as a group.”

The 22-year-old entered the final round of the series 49 points behind two-time winner Paul Dumbrell, however Hazelwood took the lead after Race 1 and managed to win the title by 95 points.

“We knew we had a mathematical chance of winning the title, we put every single bit of resource in to achieve that, and it really comes down to the team at Matt Stone Racing,” Hazelwood added.

Hazelwood also took the most ARMOR ALL Pole Positions for the season, winning the ‘Most Poles in a Season’ accolade.

News regarding Hazelwood’s 2018 plans will be announced shortly.