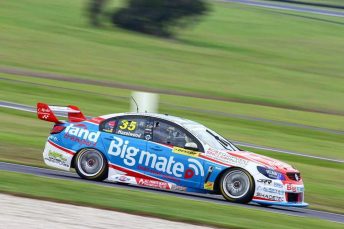 Bigmate Racing’s Todd Hazelwood has maintained second place in the Supercars Dunlop Super2 Series, after finishing fourth for the third round of the series.

Round 3 for the 2017 season saw the 21-year-old overcome difficult challenges throughout the four races, and was happy with a consistent weekend taking home a bag full of series points.

The South Australian native is now 36 points behind series leader Paul Dumbrell heading into the halfway point of the racing season.

“We’ve had a fantastic Round 3 of the Dunlop Super2 Series at Phillip Island, it has been challenging and I’ve had my ups-and-downs, but we’ve finished fourth overall which is a fantastic result for the Bigmate Racing and Matt Stone Racing team,” Hazelwood said.

“We didn’t start with the fastest package, but we really improved it over the course of the weekend, and we had the second fastest car here this weekend … and we’re really proud of that.

“Can’t wait to go into Townsville in a couple of months time, I’ve got a little bit of a break now to prepare for the next one.

“The best part about the weekend is that we’re still second in the series, not too far behind Paul Dumbrell.”

The next round of the Supercars Dunlop Super2 Series heads to North Queensland for Round 4 on the streets of Townsville.

“Really proud of what everyone has done this weekend, I made a few mistakes on my behalf that I’m not very proud of, but we’ll re-group and have a go next time,” Hazelwood continued.

“A big thank you goes to everyone for their support, especially my team partners at Bigmate Racing it wouldn’t be possible without you, a special thank you to my family and the team, and all my supporters that stuck behind us on this tough weekend.”