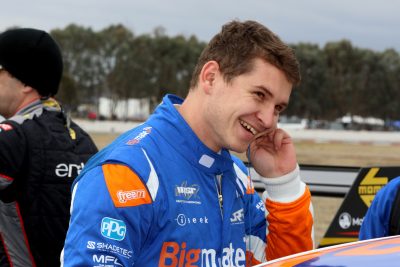 Todd Hazelwood is proud to announce that he will be an official brand ambassador for Torini Engines.

The 22-year-old will commence the role promoting the 4SS Class—both senior and junior—this weekend at the Ipswich Kart Club on Saturday, endorsing the Torini Clubmaxx engine*.

“I’m very proud to announce that I will be an official ambassador for Torini Engines for the remainder of 2018 … I cannot wait to kick-start this exciting partnership by promoting in the Karting Australia 4SS Class this weekend to help promote and grow the category,” Hazelwood said.

“Karting is the grassroots of world motor sport and for me it brings back many special memories from when I started as a seven-year-old. Karting is where you first learn race craft, basics of understanding chassis and engine technology as well as creating the love for the sport that I am heavily involved with today.

“It is great to also grow the partnership with Austech Industries and myself as they are the official tool and pit stop gun provider for the team at Matt Stone Racing.

“What the team have done at Torini is very exciting for competitors and Karting Australia. I think it is paramount to reduce costs and make it more accessible for aspiring young racers but also for anyone who wants to make the transition to entry-level motor sport.

“I believe the formula Torini have produced is fantastic and I’m very excited to be involved with this growing brand.”

“We’re excited to have Todd on board as a brand ambassador for our Torini engines,” Davis said.

“Todd started his racing career in karting and has made his way to the Supercars field, which is the pinnacle of motor sport in Australia.

“For Todd to give back now to the entry level 4SS class speaks volumes of this young guy and his love of racing.

“We look forward to working with him to help build 4SS into a popular class for people to have a go at karting.”

“It’s great for the sport as a whole to have Todd Hazelwood announced as a brand ambassador for Torini,” O’Reilly said.

“He, like many of the current Supercars drivers, continues to have a passion for karting and thoroughly enjoys his time at the kart track.

“I look forward to him sharing his knowledge and experience with newcomers to our sport as an ambassador for the Torini brand, which will in turn help the 4SS Class flourish.”

This will become the South Australian’s second role as an ambassador within the karting community, amongst his ambassador role with the Townsville Kart Club.

*Todd will be exempt from the points system and for podium contention across all 4SS races.