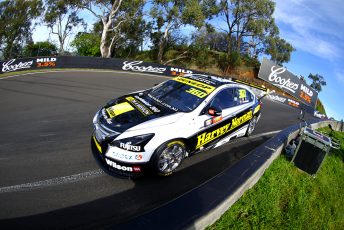 For the first time, Harvey Norman PhotoCentre will be onsite in merchandise alley, allowing fans to get photos with Supercars heroes and legends printed and signed at the event.

“Supercars fans quite often bring old photos of themselves with their favourite drivers to be signed,” Supercars CEO James Warburton said.

“By bringing the Harvey Norman PhotoCentre to the track, it allows fans to leave this year’s Supercheap Auto Bathurst 1000 with their own piece of memorabilia which can be created on the spot.

“For fans to be able to get a photo taken, printed instantly and signed all on the same day is quite a unique opportunity, not available in many other sporting codes across the globe.”

Harvey Norman CEO Katie Page says she expects the PhotoCentre to be busy across the weekend.

The Harvey Norman PhotoCentre will be available to fans from Thursday to Sunday in Merchandise Alley, Harris Park.

There will be a selection of iconic Bathurst 1000 images for fans to purchase and print on their choice of products to take home their own memories from the mountain. Anything from prints, canvases and mugs to calendars and photobooks.

Harvey Norman is offering a “Legendary Prize” at the 2017 Supercheap Auto Bathurst 1000. Details can be found at www.supercars.com, Supercars App and Supercars Social Media Platforms.

A crowd of around 200,000 is expected to attend this year’s Supercheap Auto Bathurst 1000 following last year’s second-highest attendance in the event’s history.

This year’s race is set to again reach new heights records following on from Will Davison and Jonathon Webb’s victory last year in one of the most dramatic finishes in the history of the great race.

A Heroes and Legends merchandise range, including all event lanyards, has been designed and will be available prior to and at the event.

Tickets are available through Ticketek.

FOX SPORTS will deliver LIVE, HD and continuous coverage of the Supercheap Auto Bathurst 1000 on a dedicated 24-hour Bathurst channel.

NETWORK TEN will deliver over 21 hours of LIVE coverage on TEN and TEN HD from Friday to Sunday.