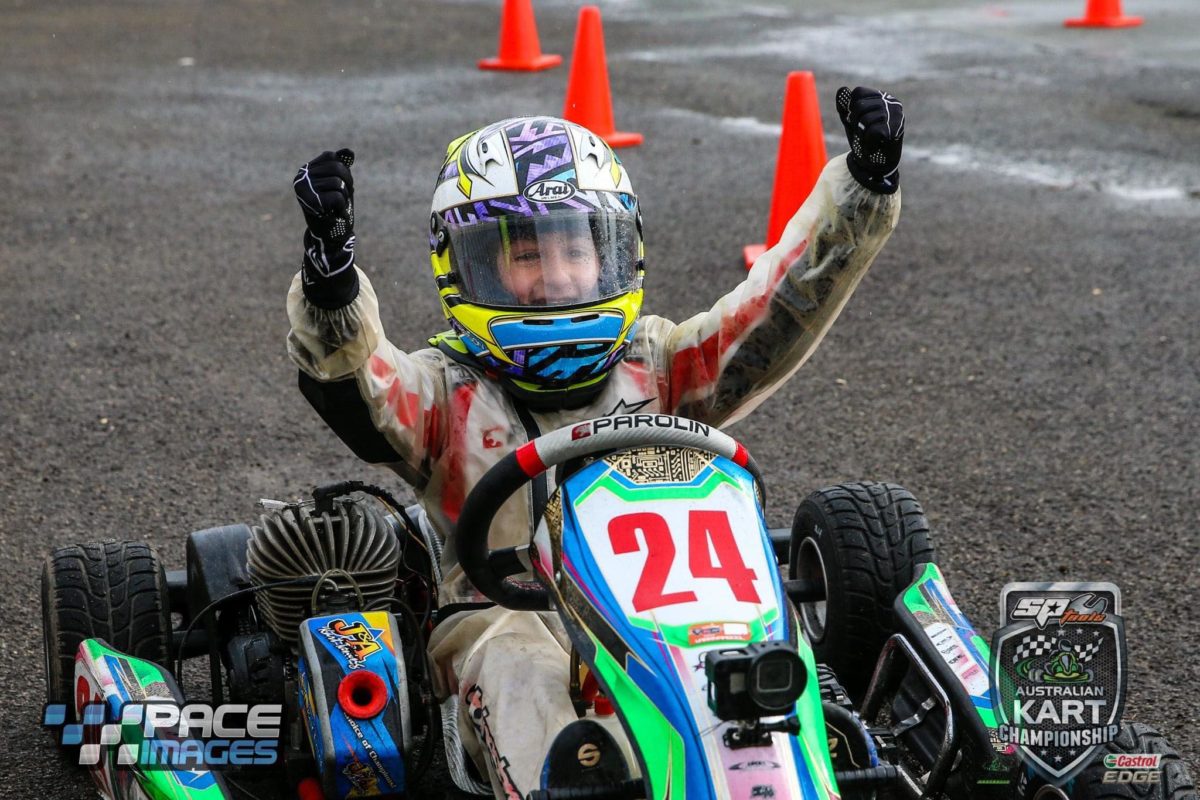 David Sera led his Kart Class team of ten drivers across five classes to the third round of the SP Tools Australian Kart Championship at the Eastern Lions Kart Club. Sera himself and won multiple state and national championship events at the circuit and was looking to lead and develop the next crop of drivers. After coming bitterly close to victory last round, the team had the elbows out ready to go racing!

Cadet 12 had the biggest Kartclass flavour with Riley Harrison, Zak Casagrande and Beau Casagrande taking on the class. Harrison lead the charge putting his entry in third spot in qualifying while both Casagrande drivers were developing their skills in their first Australian Kart Championship event. Harrison continued to lead the way in the heats picking up two second places and two race victories having him off pole for the all important final. Both Casagrande drivers continued to improve their craft as the weekend went on and enjoyed the high level experience. The final was a tough call weather to go out on slicks or wets and Harrison and his team made the right call on wets. In what was an exciting battle, Harrison was able to take out his maiden SP Tools Australian Kart Championship win! Both Casagrande drivers closed out their weekend in style and gained huge experience across the five races.

Daniel Rochford and Jake Spencer were two of the senior drivers taking on TAG 125 for the Kartclass program. Spencer set the tone in qualifying landing himself in the top five with Rochford not far behind in position nine overall. Both drivers had terrific heat results with a third and a second for Spencer. Rochford was also able to put in some stellar heats having a fourth, two thirds and a second having Rochford and Spencer sharing the second row of the grid for the final. Rochford’s charge was unfortunately over before it began, making contact with another kart and having him on the side lines early in the race. Spencer was able to race his heart out and come home just off the podium in position four overall in a great result!

X30 had the sole Kartclass driver in Jaxon Johnstone. Johnstone in a full forty kart field set the fourteenth fastest time in qualifying and now was looking to the heats to make up ground. A DNF result in heat one hurt Jaxon chances with a twenty third in heat two having him start in position thirty one for heat three. Johnstone move up to position twenty three in heat three and position nineteen in heat four to charge back up the order. Jaxon come home inside the top twenty to round out his final in a good recovery from his opening race DNF.

Peter Bouzinelos and Ben Holliday were the final Kartclass drivers taking on the premier KA2 junior class. Bouzinelos just missed the top ten in qualifying with Holliday down in position twenty five and looking to recover in the heats. Both drivers did a superb job in the heats with Bouzinelos recovering for two seconds and a third place. Holliday charged through the field to have a fourth in heat one, third in heat two and a victory in the final heat race. Both drivers were right in the battle in the final with Bouzinelos just missing the podium in position four overall with Holliday just outside the top five in position six overall.

David Sera spoke post weekend on grabbing another SP Tools Australian Kart Championship round win. “It was obviously a fantastic effort for Riley Harrison to take his maiden AKC win after his podium at Todd Road. Our KA2 juniors continued to impress being inside the top 6 throughout the weekend”. Kartclass continues to play a pivotal role in the teams championship and the team will be back at the fourth round at Emerald Kart Club in July.