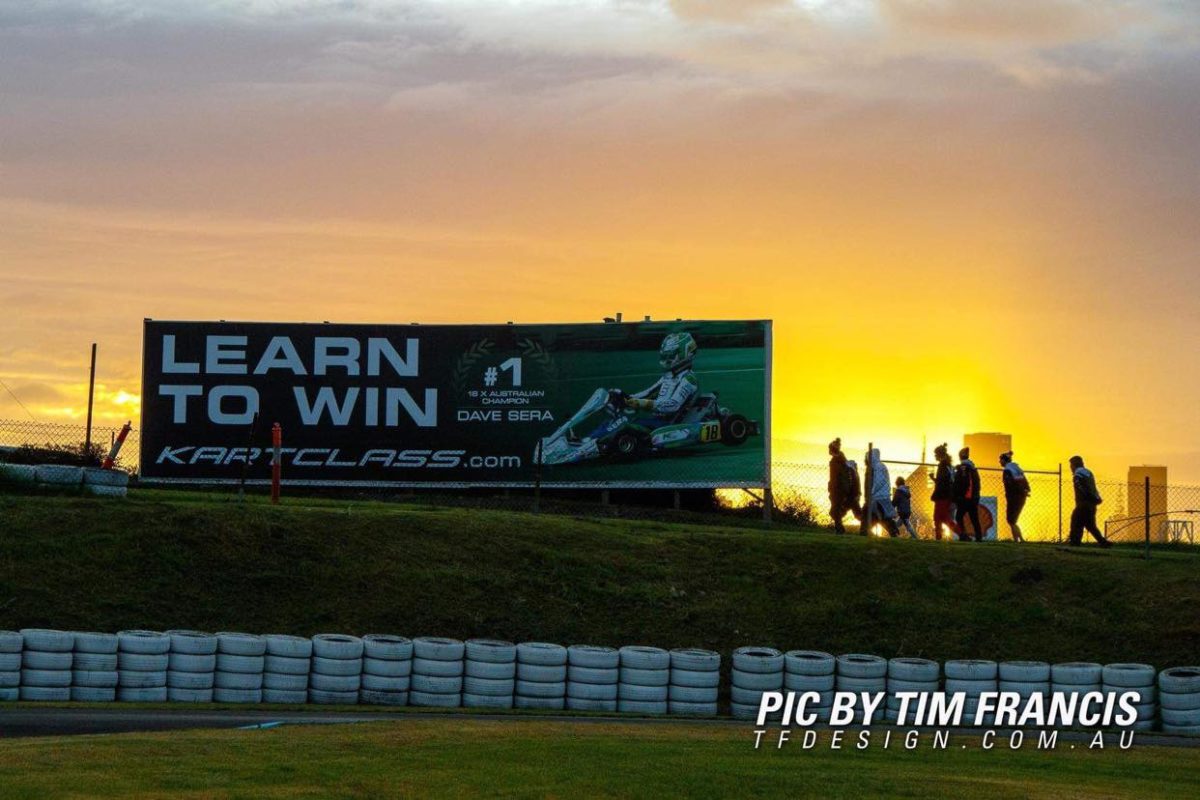 Kartclass had a seven driver team across five classes take on the Panduit City of Melbourne Titles over the weekend at the Go Kart Club of Victoria.

David Sera was once again on hand to lead the team and was looking for more karting silverware.

Harrison was part of a triple driver attack in Cadet 12 alongside Beau and Zak Casagrande.

Harrison led the charge in qualifying inside the top 10 with Beau and Zak just outside the top-20 in 24th and 27th.

Harrison had an unfortunate DNF in Heat 1 but didn’t finish outside the top five in the remaining two heats, with Beau and Zak Casagrande both moving into the top 20 in the heats and looking to move up the field.

Harrison raced his heart out in the final and was able to come home with a podium in third.

Zak Casagrande had an unfortunate DNF in the final, ending his weekend on a sour note after showing improving pace.

Jay Kostecki did a brilliant job in qualifying to put himself in fifth and right in the front group.

Kostecki raced hard and never left the top five across the heats with fourth in Heat 1, third in Heat 2, and fifth in the final heat race.

Jay battled in the lead group across the final, coming home just outside the top five in sixth in a brilliant final race.

Georgia Morgan while still learning her craft qualified just outside the top 10 in 13th in the KA4 Junior Heavy field.

Morgan was able to finish all three heat races and wad consistently running inside the top 15 drivers still while on her provisional license.

Georgia was once again able to complete the final inside the top 15 coming home in 13th.

Peter Bouzinelos had a tough start to his weekend in KA2 Junior not setting a time in qualifying and then having a DNF result in heat 1.

Peter regrouped in the second heat and made his way back up into the top 10.

Bouzinelos had his unfortunate bad luck return on Sunday morning with another DNF result through no fault of his own.

Starting off the rear, Peter worked his way into the top 10 and came home in 6th in a great final race.

Jaxon Johnstone was the only senior driver in the Kartclass team and qualified in 15th overall.

Johnstone had another top-10 finish in Heat 3 and was able to come home with a credible 10th overall in a national level field.

“A difficult weekend for the team with a few of our drivers racing at Todd Road for the first time,” Sera said.

“We saw them achieve PB’s each time on track which was encouraging.

“We’ll look to bounce back at Newcastle where we have multiple drivers in podium contention.”

Kartclass will be back on track for the final round of the SP Tools Australian Kart Championship in Newcastle.