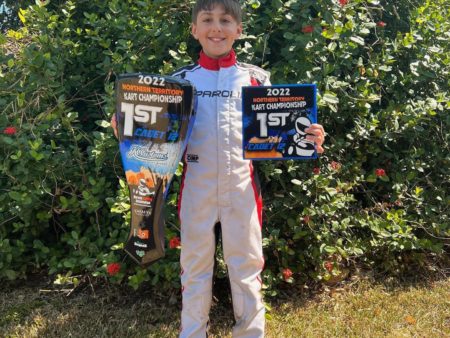 Riley Harrison made the long trek north to the Northern Territory State Championships over the weekend just gone.

Harrison had a break through victory at the start of June taking his maiden SP Tools Australian Kart Championship round win.

Riley was looking to add more silverware to his cabinet by taking out his first state championship as a Cadet 12 driver.

Harrison was up against some stiff competition and tough local drivers.

Harrison hit the track on Friday night for his qualifying session and was looking to get as far up the starting order as possible.

The Xpert Electrical & Air backed entry started to get into his grove but an electrical gremlin in his kart was costing him valuable time.

Riley managed the situation the best he could and pushed hard to get a strong lap in.

Harrison was able to stop the clock with the sixth fastest time, a great result considering his issues.

Heat one came around and Riley was starting off the outside of the third row and was looking to move forward.

The J & A Kart Tuning powered entry got a clean get away moving into fifth spot on the opening lap.

Harrison made a double move on lap two, moving to third and was looking to continue his progress forward.

Riley was able to make his way into the top two on lap six and finished in second spot in a great result from sixth on the grid.

Riley was looking to do much of the same in heat two and move forward up the field.

The Kartclass supported entry settled into seventh spot at the end of the opening lap.

Harrison put in a blistering first half of the race, moving up to second spot by lap five and chasing after the race leader out in front.

Riley was able to put in a move for the race lead on the second last lap of the race from as low as position seven.

Harrison was able to cross the line with the heat win and this put him off pole position for the third heat.

Harrison was up on pole position for the third heat and was now looking to stay there for the rest of the weekend.

The Xpert Electrical & Air backed entry got a smooth start and settled into the race lead for the first half of the race.

Riley had Connor Meyer trying to chase after him and put the pressure on the race leader.

Harrison was able to come through and take his second heat win of the weekend by six tenths of a second.

Riley went into the final heat race of the weekend looking to make it three from four heat wins.

The J & A Kart Tuning powered entry got another clean get away and was able to hold the lead in the opening stages of the race.

Harrison once again had pressure from behind but the young driver was holding the field and bay and continuing to lead the race.

Riley was able to cross the line for his third consecutive heat win and went into the final full of confidence.

Pressure was in the air before the final as Harrison was looking to come home with his first state title win as a Cadet 12.

The Kartclass supported entry got away cleanly and was leading the early stages of the race.

Cadet 12 racer Beau Casagrande was right behind the race leader and keeping Riley under pressure during the 20-lap final.

Harrison was able to hold his nerve and open up a race winning margin in the back end of the race and take out the state championship win.

“It was an awesome performance from Riley,” Scott said.

“Its so good to win a blue plate and I’m very proud of him.

“We’d like to thank the Kostecki, Casagrande, and Webster families for their help and hospitality all weekend, David Sera,and Jake Sawyer for the coaching and advice, Anthony Bartolo from J&A Kart Tuning for the engines, and Parolin Australia for the kart.”

Harrison will be back on track this weekend for round four of the SP Tools Australian Kart Championship in Emerald.