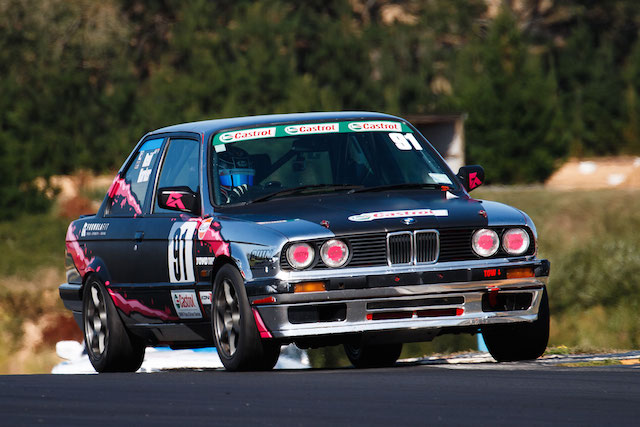 The first of two rounds in the Castrol BMW Race Driver – Endurance Series, the one-day event had an eight-lap preliminary race that led in to the hour-long endurance event for both the E30 and Open Class category of car.

A feature of the hour race is to allow other drivers to share in the results – an opportunity Richard Oxton offered to four-time New Zealand Gold Star winning driver David Oxton.

Oxton senior carved a star-studded motor racing career from the late 1960’s through to the mid-80’s, competing mainly in high-horsepower open-wheel cars. Along with the four Gold Star titles he was a regular in the Tasman series that featured many of the world’s Formula One drivers of the day – including the likes of Chris Amon, Denny Hulme and Bruce McLaren.

The newly established endurance aspect to the Castrol BMW Race Driver Series includes a compulsory driver change pit stop – where single driver cars must exit the vehicle, run around the car, and get back in.

“During the one hour race we had a 20 minute window to pit for the driver change – and as I was two/three seconds a lap slower I said to Richard if you want to win the race I should do the minimum laps.

As we didn’t have any safety car breaks he carried on to 35 minutes (of the 40 in which the car’s driver had to stop) and I did the last bit,” added Oxton.

“He handed over to me in the lead and Reid (Harker) just blew past me and I hung on battling for second, and for third in the end. So absolutely in admiration of those young drivers who know what they are doing. I was just lucky to jump in to a car that was in the lead and not lose too many places.”

“He (Richard) could have won it on his own – that’s what young Reid Harker did. Matt Griffen and the Hodgson boys are – well, I’m in awe of them to tell you the truth.

“When I see how good those boys are and the way they drive those cars – I will never criticise anyone who is three seconds off the pace because I know what it takes to do it.”

“In the world of fathers and sons it is pretty neat to do things – so I’m pleased they’re pleased. It was more about ‘wow aren’t we lucky to be able to do it’ – and we did,” said Oxton of the experience.

Oxton last raced competitively in 1985 – where he drove the second Holden Commodore of Peter Brock’s team at the Wellington street race.

While the morning’s eight-lap race was won by Mark Crompton, third placed Reid Harker (who finished behind Richard Oxton) showed the benefit of consistent lap times to win the hour long race with a margin of 39sec over the Carruthers/Easton E30 BMW.

Matakana’s Warwick Mortimer had the faster paced car during the late morning race – to take the win over Sievwright by a margin of 30seconds.

The afternoon’s hour-long race become a battle of strategy. While Mortimer had the faster set up car a slick and early stop by Tauranga based Fraser during the driver change had him in and out of the car with enough of a time benefit to return to racing in third position overall.

As the remaining cars completed their stops Fraser moved to the front and stayed ahead of Mortimer and Sievwright just after the half-way mark through to the end of the race.

Driving the E36 M3 in the series for the first time Fraser said the hour race was far more interesting: “Since I have been doing one hour races I’m sold on the principle. It’s an opportunity to get a top result by not having the fastest car – as tactics come in to it.

It’s another whole experience to racing – compared to sprint events. You’ve got the elements of strategy plus racing in traffic – so there is a lot more action and tests your ability to get past other cars.”

However it was his pit stop strategy he believes netted him an additional 30 seconds of race time to put him at the head of the field.

“We timed our pit strategy alongside the deployment of the Safety Car. That was at about the 16 minute mark and the pit was to open at 20 minutes for the driver change, so I knew it would be pretty right on,” added Fraser, a business accounting strategic planner.

“It was then a matter of getting the timing right. As the Safety Car crossed the start/finish line my team guy counted down the seconds over the radio. By the time we approached the pit entrance we were just seconds past that 20 minute mark – while the rest of the field continued behind the Safety Car.”

Fraser got to the flag 7.292 seconds quicker than second placed Mortimer – the only two cars to finish on the lead lap. Sievwright retired just after the 29th lap leaving Mortimer the prime challenger.

The second and final round for the endurance title will be held 8th May 2016 – back at Hampton Downs. The third round (of seven) of the pre-existing Castrol BMW Race Driver Series resumes 16 January at the Taupo race circuit.