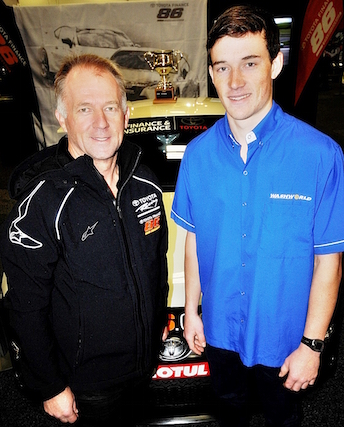 MEDIA RELEASE: Albany racer Reid Harker is the first to sign on for the third season of New Zealand’s premier single-make race series.

Harker began his racing career at age 13 in karting, winning the 2010 Top Half Junior 100 class and then won Formula Junior at the Kartsport NZ schools championship and the Arai Rotax Max Challenge Junior Class the following year.

He briefly raced Formula First and then moved into the popular BMW E30 single-make series. He says the single-make racing experience he gained in the E30s convinced him the Toyota series was his next step.

A one-off Toyota drive at Hampton Downs for the final round of the 2014-2015 championship gave him valuable insight into the skills required to be competitive and he
was immediately on the pace, with a string of finishes just short of the podium.

“The Toyota is a more rewarding car to drive and the championship is very competitive. I learned so much about driving the TR86 in that one racing weekend. Hampton Downs is very much my home track,” he said.

Longer term, Harker says he has his sights set on an international career in GT, endurance or touring car racing.

Championship co-ordinator Geoff Short says the early commitment from Harker is an indication that there is keen interest from drivers in the third season of the series.

“This is a great endorsement for the series from a talented young racer, and the Speedshow presence attracted a number of other keen prospects that we will now work with to fill out the starting grid for round one in November,” he said.

The Toyota Finance 86 Championship is an initiative established in 2013 by Toyota New Zealand.