While a bumper field of 40 AMCA National drivers were hot in contention for victory during last weekend’s Australian Title at Toowoomba’s Hi-Tec Oils Speedway, it was former champion Matt Hardy who put his skills as a driver to the test, managing to conquer them all. 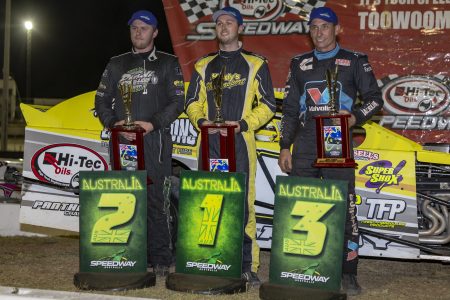 Heading into the 40-lap feature race, one could be excused for not counting Hardy as one of the favourites, given that he was set to start the race from deep in the field out of position 11. However, the 2016 Australian Champion refused to let that hinder his chances.

Making quick work of his competition by utilising the low line, it was at half-race distance that Hardy found himself in the runner-up spot, where he turned his full attention towards chasing down race leader and Tasmanian Rodney Bassett, who looked like a good chance to claim the Australian Title crown, having led the race since the drop of the green flag – until Hardy came into view.

Mounting the pressure on Bassett, Hardy was eventually able to pip his rival after four laps of pursuit, taking his place at the front of the field, where he remained to win the second Australian Title of his career.

Another hard-charging performance came from Lee McKinnell (Qld), who powered forward from position eight to take over the runner-up spot with just eight laps remaining, securing a pleasing podium ahead of second-place starter Tony Blanch (NSW), who couldn’t quite hold on to second but was able to round out the podium in third.

A consistent weekend for Shane Cartwright (NSW) culminated with a fourth-place finish, while current Queensland Champion Nathan Durston (Qld) did well to navigate the turbulent race to improve seven positions and cross the finish line in fifth place.

Slipping further backwards after losing the lead to Hardy, it was a disappointing conclusion for Bassett, who was forced to settle for sixth place, ahead of Raymond Kime (NSW), who managed to halve his 14th-place starting position and outgoing Australian Champion Jeremy Moore (SA), whose race certainly didn’t go as planned.

Completing the top-10 were Peter Markulin (NSW) and Thomas Vickery (Qld), the latter of which did extremely well to hold on for a top-10 finish after transferring into the feature race by virtue of winning the B main.

The crowded infield made it clear that this was a race of attrition, with no less that nine drivers experiencing heartbreaking DNFs, led by 2017 Australian Champion and current Victorian Champion Tim Reidy (Vic), whose hopes of reclaiming the title were dashed midway through the race after earlier spinning out while challenging for the lead.

This Australian Title victory couldn’t have come at a better time for Hardy, with this season’s running of the Queensland Title being held this Wednesday night at Brisbane’s Archerfield Speedway. While Hardy is in the best possible form heading into the event, a number of other drivers will be ones to watch, including defending champion Durston, who will be looking to go back to back.