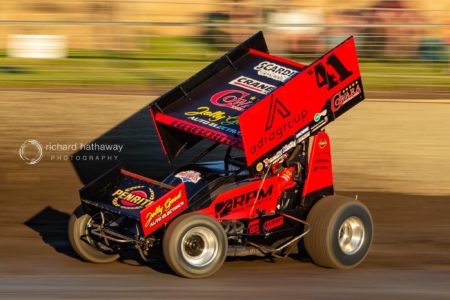 As the saying goes, there is no I in team, and that is certainly the case when it comes to Daniel Harding and his 410 Sprintcar team.

Harding, who was the winner of last Saturday night’s second Maddington Toyota Sprintcar Series round which doubled as the 40th running of the King of Wings at the Perth Motorplex, has made an impressive start to the new season, but none of it would be possible without the support group he has around him.

“I can’t thank my team enough for all of their ongoing support, and to pick up my first feature-race win in nearly two seasons was the perfect way to thank them,” commented the 33-year-old racer from Perth, Western Australia.

“It all came together for us on the weekend, and we also had a bit of luck on our side, too, but what was without a doubt the highlight of the win was seeing the delight on the faces of my team after the win.”

Despite the WA # 41 Adra Group / Cowara Contractors / RPM Race Products supported Triple X car being owned by the Harding family, there are plenty of cogs in the wheel that help the Harding Racing team function.

“Robert Osborn from the Adra Group, Rick Musarra from RPM Race Products / Cranecorp Australia and Steve Duggan from Cowara Contractors play their vital roles within the team – not just as sponsors but they are really hands on with our team,” explained Harding, who is currently in his 11th season in 410 Sprintcars.

“Apart from their involvement in the team, we have plenty of numerous minor sponsors that help our team, along with my brother and crew chief Trevor Harding Jnr and my long-time pit crew member Todd Fabry, and I can’t overstate the importance of everyone’s role within the team.”

Harding continued by saying that following last season’s horror run, which saw him unable to achieve many feature-race results despite showing a lot of race-winning speed, he had made several changes heading into the new season, which have so far proven beneficial.

“I was burning the candle at both ends in my life with trying to juggle family, business and racing, and that played a big part in my struggles last season on the track, so it was important that I took stock of everything in my life, and I managed to do that,” Harding said.

“Since making a few changes in my life, I feel that there is more of a balance with my family, business and racing life, and I’m beginning to see the benefits of doing this with my performances out on the track and give my team with the results that they deserve.”

As the current Maddington Toyota Series point standings leader following last weekend’s success, Harding isn’t getting too far ahead of himself.

“I’m taking the approach of just taking each race meeting as it comes, as well as continuing to work hard as a team, and whatever happens after that is pretty much out of my control,” enthused Harding.

The third Maddington Toyota Series round is to be fought out at the Perth Motorplex this Saturday night, and Harding is looking to continue his feature-race podium streak, which currently stands at three.

The Harding Racing team is proudly supported in the 2021-22 season by: