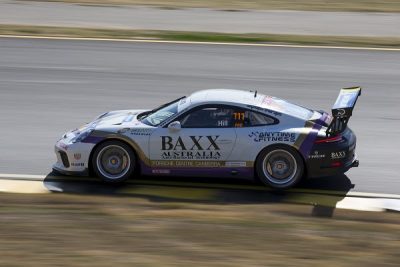 Cameron Hill says his top-five finish in this weekend’s fifth round of Carrera Cup at Sydney Motorsport Park is a demonstration of the enormous progress made by his team since the start of the season.

After qualifying fifth yesterday, the 21-year-old Canberra driver finished sixth and fifth in today’s two series races. He also finished ninth in the Carrera Cup Australia v Asia night race, to round out his best weekend since debuting in the series.

“We’ve made massive improvements since the start of the season, and this was a weekend where we finally achieved the sort of results that reflect where we are in the pecking order,” Hill said.

“At Adelaide, we were almost two seconds off the front-running pace but this weekend, we were only 0.3s off pole – that shows how far we’ve come in the last four rounds.

“In the first race, the car was strong early but it faded towards the end; we made some changes and it was a lot more consistent in the second and third races.

“It was by far my best performance as a driver; in previous rounds, I made critical mistakes which proved costly, but this weekend I kept the errors to a minimum, and we were able to put an entire weekend together.

“It’s a nice boost for the team – we’ve all gone through some tough times but no one has ever given up, and these results show we’re heading in the right direction.”

Hill said the next stage will be finding the incremental gains needed to compete for podiums and race victories.

“The hardest work is still ahead of us, because we’re now at the stage where we’re looking for minute improvements to take us to the next level,” Hill said.

“It’s a combination of fine-tuning the car and improving my performance behind the wheel, and I’m looking forward to seeing what we can achieve at the next round at Tailem Bend in three weeks.”