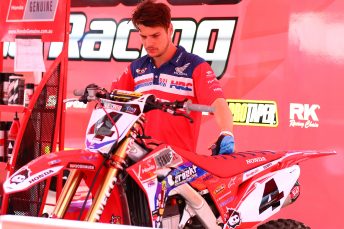 Crankt Protein Honda Racing’s Todd Waters and Luke Clout endured one of their most difficult weekends yet at Sydney’s 2017 AUS-X Open event on 11-12 November, despite displaying a strong pace across the weekend.

Saturday’s opening night of racing ahead of a sell-out crowd, which also served as round four of the Australian Supercross Championship, saw mixed results for both riders in the SX1 premier class.

After qualifying in 14th position with a fast time of 32.681s, Waters was unable to make his way through to the main event through the heat or semi-final races, but eventually captured victory in the last-chance qualifier to secure his place on the 12-rider grid.

Following a hard-fought 20 laps, the Queenslander would finish out night one with a 10th place SX1 main event finish amongst a stacked field of world-class racers.

Meanwhile, qualifying in seventh place with a fast time of 32.024s, SX1 rookie Clout was forced into to move into the semi-final races after finishing sixth in his heat. Rocketing out to the early lead in semi-final two, Clout unfortunately fell and found himself battling for a main event spot via the hotly-contested LCQ, where he came up just one position short.

After nursing a hand injury throughout Saturday’s racing, Clout confirmed he would not contest the following day and ultimately exit the series prior to this weekend’s Jimboomba season-finale to begin his recovery process.

“It was a bit unfortunate to be riding with a fractured finger and a fractured knuckle – it’s pretty hard – but I tried to do what I could,” said Clout. “We had some good speed, but we kept making mistakes and that was because of the hand and it was a bit unlucky and unfortunate.”

Although disappointed to finish out his rookie season one round early, Clout remains positive as he reflects on his first season contesting in the premier category aboard his factory-supported Honda CRF450R.

“I think it was a good year,” he added. “Obviously we had some crashed and things like that at the end, but that was because I was injured and we were struggling with some bike set-up stuff. Other than that, we were pretty strong and we had a good year, we learnt and we built and that was what we had planned for this year.”

With Clout sidelined for the penultimate round of AUS Supercross on night two, it was Waters flying the flag for the official Honda squad, claiming fourth in his heat. Unfortunately he later found himself watching the 20-lap final from the stands following a string of mistakes in the semi-final and LCQ races that denied him a place on the grid.

“For me it was a very disappointing weekend, but that’s unfortunately the way it goes – that one’s on me,” Waters explained. “I’ll now do my recovery stuff, have a few rides during the week and make sure I feel good and prepare myself well heading into Jimboomba. My main focus is on this last round and I just have to give it my best shot and that’s all I’m focused on.”

Waters now sits seventh overall in the SX1 series standings as Clout drops down the running order to 12th place. Jimboomba X Stadium’s final round of the 2017 Australian Supercross Championship will take place this Saturday, 18 November, in Queensland.

To stay up to date with the Crankt Protein Honda Racing Team, visit the team’s official website at www.teamhondaracing.com.au or follow @teamhondaracing on social media.