Happy Gilmore on top of the world

Happy Gilmore on top of the world 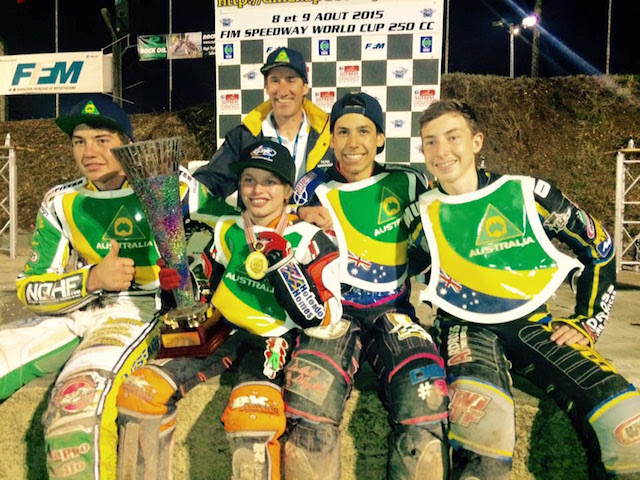 MEDIA RELESE: The star of up-and-coming Australian Speedway rider Matthew Gilmore is rising, and it is rising fast.

The 15-year-old became the toast of the Australian speedway fraternity last month when he won the FIM 250cc Youth Speedway World Cup in Lampthe-Landerron, France.

A series of disruptions throughout the meeting did nothing to faze the young man affectionately known as ‘Happy’, who not only had to weather a semi-final washout on the Saturday, but also a number of re-starts in the Sunday final before executing a clinical display of riding to take out the title.

The quietly spoken Gilmore suggested an intensive preparation, which included heading over to Europe six weeks in advance to acclimatise to the conditions and tune up bikes, was the key factor behind being able to deal with the pressure.

“We went to Denmark and got the bikes and rode the 85cc over there in the days before the event,” Gilmore said.

“Then we rode at the world title, before heading back to England to watch Brady Kurtz (Somerset Rebels rider) in Italy for the Under 21s (FIM Under 21 Speedway World Championships).

“We then came back and started doing the bikes and watched a few race meetings before we went to France to practice and race.”

Gilmore added that the stop-start nature of the event worked right into his favour coming into the final.

“It was pretty good because we only had a certain amount of tyres and it suited because they ran the event in a GP format,” Gilmore said.

“We had a couple of restarts; on the first one I missed the start, and then we had two other ones and I got the starts in them. Then we went up to the pits and they changed the tyre around, and from there the nerves went away and I was alright.

“I went from gate 5; I went past the blue helmet fella (Russian Arslan Fayzulin) and I just dropped the clutch and just went around the outside of them and led from there on.”

Gilmore said being around the other young Australian riders, as well as team manager and former Australian speedway star Mark Lemon, helped him settle in to racing away from home.

“I got along well with the others; we race against each other all the time so it helps when you have a few others there that you know,” Gilmore said.

“Mark was also really good. He gave me some advice with the gates in the semis, as well as reminding me not to get ahead of myself.”

Lemon himself was full of praise for the youngster, and predicted a bright future.

“Matthew was the stand out competitor and was a worthy champion,” Lemon said.

“He is only tiny, but he had bags of speed, control and great racing technique to match.

“Happy held his nerve to take the final that was re-ran no less than four times, which proved that he was the deserving winner.

“He is a extremely determined kid of very few words to say, but he was very grateful for all the help he had to get to France.”

Gilmore has continued his great run in September – winning his third New South Wales Under 16 125cc Speedway Solo Championship on the weekend – but in what seems to be a trademark of all champions, the youngster still remains unsatisfied and hungry to improve.

“I need to work on my starts, that’s the main one,” Gilmore said.

Despite this, Gilmore at the very least can take heart from the fact he has nailed the start of his blossoming career.