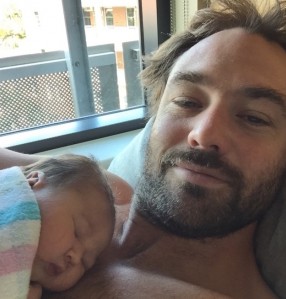 This will be the first child of the third generation of the late Gregg Hansford and son Ryan couldn’t be happier.

“Ruth and I are just completely overwhelmed with happiness at the moment, it was definitely one of the most amazing days of my life and we can’t wait for what lies ahead.

“Dad would be overjoyed if he was here and I’m sure he has a big smile on his face right now,” said Hansford.

Hansford has accomplished a lot in the past month, not only 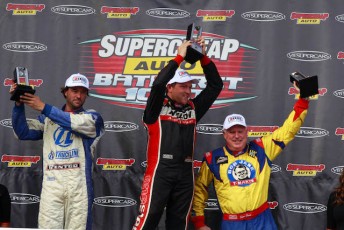 Ryan (left) standing on podium at the 2013 Bathurst event. Celebrating the 20th anniversary of his Father’s Bathurst 1000 win with Larry Perkins

welcoming his first child but also a continued deal with long-time supporter Mulitspares, which will see the young dad race in the 2016 V8 Ute Series.

“It’s great having Multispares back on board for another year, they have been a great support over the past few years and it will be a pleasure to be racing for them again,” said Hansford.

Hansford is currently running 8th in the ARMOR ALL Drivers Championship heading into Round 6 of the 2015 East Coast Bullbars Australian V8 Ute Racing Series, at the Supercheap Auto Bathurst 1000 8 – 11 October.

Hansford stood on podium at the event in 2013 when celebrating the 20th anniversary of his father’s (Gregg Hansford) Bathurst 1000 win with Larry Perkins.