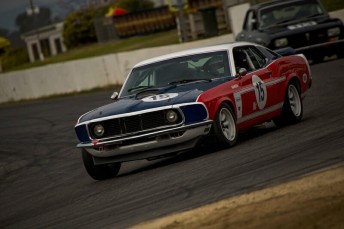 Ford Mustang Fastback driver Darryl Hansen fought back from adversity to claim a spectacular race victory in the 20-lap Group N Rose City Touring Car Trophy, one of the feature races at the weekend’s Winton Festival of Speed.After qualifying second, Hansen was involved in a collision with polesitter Bill Attard at Turn 1, dropping to 14th.Hansen staged a stunning drive through the field, moving up to second behind Michael Anderson before a late-race Safety Car was deployed.At the restart, Hansen captured the lead and took the win by just over a second from Anderson, while Attard finished third ahead of early race leader Keven Stoopman.John Bowe won the Mick Ronke Trophy for the Group Q and R Racing category, driving his 1974 March Formula 1 car to comprehensive wins in all three races. Bryan Sala was best of the rest in his Formula 5000.Geoff Morgan collected the Tourist Trophy for Group S Production Sports Cars, winning the 12 lap race in his 1975 Porsche 911 ahead of the similar Porsche of Peter Eames, and the MG Midget of Damien Meyer.The historic Formula Fords produced thrilling four-way battles for the lead in all three of their races, with Andrew McInnes, David Hardman, Jonathon Miles and Nick Bennet running nose-to-tail for the entire duration of each race.McInnes won the first two races, but speared off the track in Race 3, handing the win to Hardman.After a tight battle with Dick O’Keefe in the first Group J, K and Lb race, Samantha Dymond prevailed in Races 2 and 3. Fred Greenklee also ran strongly with second-place finishes in the first two races, before retiring with mechanical problems in the final.The BMW M3s of Jervis Ward and Bill Cutler led the way in qualifying for the Group C and A races, but Cutler’s challenge was over within three corners of Race 1, when a suspension failure pitched his car into the wall, ending his weekend.Milton Seferis took advantage to swoop into the lead aboard his ex-Peter Janson Commodore, and he won all three races despite strong challenges from Ward.Rod Hatfield chalked up a trio of third-place finishes in his L34 Torana, while 1966 Bathurst winner Bob Holden was best of the smaller-capacity cars in his Toyota Corolla.The Five Litre Touring Cars held three demonstration runs over the course of the weekend, with notable cars and drivers taking part including the Pirtek AU Falcon V8 Supercar qualified on pole position by Marcos Ambrose at Bathurst in 2001.The Falcon was driven on the weekend by Wayne Wakefield, who was also Ambrose’s ’01 co-driver.Other category winners over the weekend were Laurie Bennett (Group M and O) and Michael Gibson (Group Q and R Sports).