Hankook kicks off the 2017 endurance season with the 24H Dubai

Hankook kicks off the 2017 endurance season with the 24H Dubai 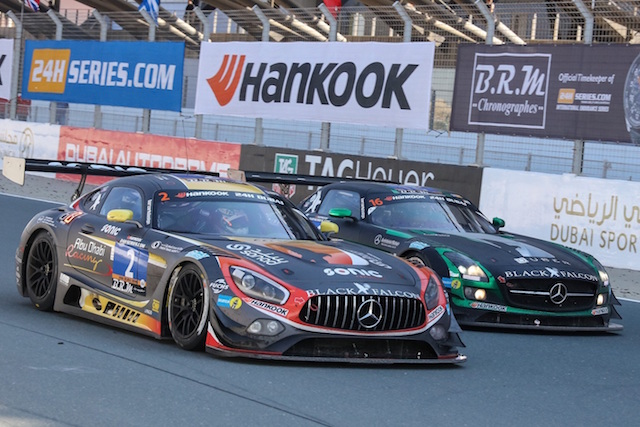 MEDIA RELEASE: For motorsport fans, the wait is finally over in the second week of January.

The 24-hour classic in the United Arab Emirates also represents the first stop for the 24H Series powered by Hankook, which the premium tyre maker has supported as exclusive tyre partner and title sponsor since 2014.

New this year is the 24H Proto Series, which makes its debut on the support programme for the desert endurance highlight with the Hankook 3x3H DUBAI for prototypes.

Neu-Isenburg/Germany, January 12, 2017 – The preparations of premium tyre maker Hankook for the start of the season in the Persian Gulf began back in November of last year.

The black gold arrived in the largest city in the United Arab Emirates last Saturday. In order to be able to offer all the teams perfect service at all times, roughly 50 employees will be in action for the exclusive tyre partner at the Dubai Autodrome.

“Our mechanics will be working in three shifts on five assembly lines. The Hankook race engineers will be available at all times, should the teams have any issues regarding the tyres and set-up.

“As at all the rounds of the 24H Series powered by Hankook, we are providing one standard compound for all tyre sizes at the season-opener in Dubai. As such, we are, as much as possible, ensuring everyone in the field has the same opportunity,” said Manfred Sandbichler, Hankook Motorsport Director Europe.

The 5.39-kilometre Dubai Autodrome is one of the most modern circuits in the world and, with its long, asphalted run-off zones, is regarded as one of the safest racetracks.

The sand plays a key role at this 24-hour spectacle. Manfred Sandbichler: “The amount of sand on the track depends on the wind and the weather.

“These different track conditions affect the performance of the tyre, and the drivers must adapt to this. Last year, it even rained in Dubai. This meant that the mixture of water and sand did not flow off the track at all, but remained standing on the racing surface.

“The Hankook rain tyre and the slick, which has obviously been used far more, have passed these tests with flying colours and have always impressed at the opening motorsport event of the year in Dubai. We have received nothing but praise from the teams.”

99 cars have registered for the 2017 Hankook 24H Dubai: from Renault Clios and MINI right up to the big GT3s, all types of car are represented.

As in previous years, top manufacturers including Ferrari, Lamborghini, Mercedes, BMW, Audi and Porsche will be in action at the 24-hour highlight in the desert.

“All the big names will be at the season-opener in Dubai, and the motorsport world will be watching.

“We want to offer the different car types and manufacturers optimal support with our wealth of experience in the field of endurance racing. In doing so, we will also showcase the performance of our premium products.

“The organiser Creventic is a fantastic partner, with whom we work together perfectly and are always able to develop new formats,” said Manfred Sandbichler.