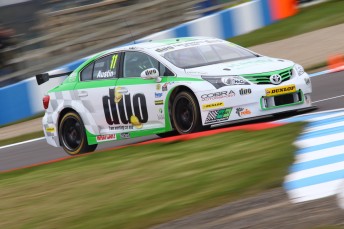 Concluding the four-hour session at the Leicestershire venue’s 1.98-mile National Circuit just 0.157 seconds away from the top of the timesheets, a position nabbed late in the day by triple BTCC Champion Matt Neal, Austin’s quickest time was a lap of 1m10.297 seconds (101.35mph).

At the sharp end throughout the day’s running, heading the times during the first couple of hours, the 34-year-old’s Toyota Avensis ran faultlessly and as well as a top three placing overall, Austin also finished the test as the quickest of the Independents Trophy contenders.

Notably, the Swindon-based team worked through an extensive schedule during the test – race runs, qualification simulations and a variety of set-up changes – with no focus on trying to simply top the times for a morale boost.

“I’m over the moon with today but we have got to be realistic with our expectations for Brands, going fast is only one part of it in the BTCC.

“I’ve still got a lot to learn with the front-wheel drive. In my 20-year racing career I’ve only done three races in front-wheel drive, and that was 12 years ago, so Brands will be a big learning curve for me.

“We’re keeping it realistic but this is a fantastic start, especially considering we didn’t throw a load of new tyres at the car to just go for times.”

While winter testing in Portugal and the UK has gone very well for Handy Motorsport, not least the excellent performance at Donington Park today, team principal Simon Belcher says the squad is still going to reserve judgement on the true state of play in this year’s championship until the opening event of the season at Brands Hatch 10 days from now.

“Today has been really good – I’m happy, Rob is happy, and he actually left a couple of tenths on the table from his ideal time so there was the potential to be quickest overall”, said Belcher,

“I really am elated the team has been this competitive, we thought we could be from winter testing and the car has been trouble-free all day.

“We managed to get some qualifying and race simulations done and ticked all the boxes, to be third on the times and just a tenth off fastest, well, we would have been happy to take that at the start.

“We need to see where we are at Brands before we get a true picture, but Rob is driving fantastically and after racing rear-wheel drive so long, he has adapted to front-wheel drive unbelievably well.”

Following today’s official test, where a mammoth entry of 32 cars was confirmed for this season’s championship, all attention now turns to the opening BTCC race meeting of 2016 which will take place at Brands Hatch Indy Circuit in Kent on 2nd/3rd April.