Leading Modlites racer Klinton Hancey is continuing to enjoy success since stepping into V8 Dirt Modifieds at the beginning of the season, most recently emerging victorious in last Saturday night’s Queensland Title at Maryborough Speedway. 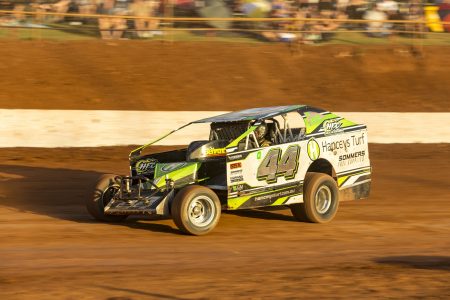 Experiencing what has been a pleasing introduction to V8 Dirt Modifieds, Hancey, who is also the current Australian, Queensland, NSW, Victorian, SA and WA Champion in the Modlites class, has gone from strength to strength with each outing; however, his transition hasn’t been without a learning curve.

While last month’s Australian Title at Toowoomba’s Hi-Tec Oils Speedway was a difficult one, despite going on to finish the feature race in 12th, Hancey struggled with numerous issues that were the result of a crash during the Paul Britten Memorial at Archerfield Speedway earlier that month.

Although Hancey and his team had worked tirelessly to fix these issues, it was simply due to a lack of understanding of the car that they were unable to determine the extent of the damage prior to the Australian Title-deciding feature race; a fact that they were focused on to rectify heading into last Saturday night’s event – and rectify they certainly did.

A model of consistency from the outset, collecting a second, third and first-place finish in his three heat races, Hancey earned pole position for the 30-lap Queensland Title-deciding feature race.

Knowing that he would need to get the jump on his rivals at the drop of the green flag in order to break away from the rest of the field, that’s exactly what the pilot of the Qld # 44 Hancey’s Turf supported car did, going flag to flag to claim a well-deserved win and his first V8 Dirt Modified title crown.

“It’s a pretty amazing feat to come out on top of such a strong field in an event like the Queensland Title and it’s something we’re all very proud of,” expressed the 37-year-old racer from Kawana Waters in the Sunshine Coast region of Queensland, whose maiden V8 Dirt Modified feature-race win occurred at Maryborough Speedway during the King of the Ring event back in November.

“Our preparation for the Australian Title was definitely an experience in education for us, but to be able to learn from that and bounce back in such a way during the Queensland Title is a great feeling.

“The whole team has worked so hard this season, juggling our time between V8 Dirt Modifieds and Modlites, and I can’t thank them enough for everything they continue to do for me.”

Hancey would like to thank his 2018-19 season sponsors: Hancey’s Turf, LGM and Sommers Fuel Supplies.