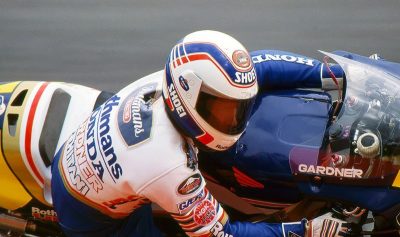 Wayne Gardner, the Aussie battler who went from owning a $5 motorbike to winning the 500cc World Championship, will be at Hampton Downs next Saturday, August 18 for a meet-and-greet with fans.

Gardner’s visit to New Zealand coincides with the release of Wayne, an inspirational documentary that follows his wild ride to the top of motorcycling’s premier class. Gardner’s journey began in the small town of Wollongong in New South Wales.

“Wayne is about as Aussie as a story gets but the themes of the movie couldn’t be more universal,” says Fraser Brown, the executive producer who also worked on McLaren, a highly acclaimed biopic about the legendary Bruce McLaren. “It’s about having the guts to follow your dreams no matter what, while never losing sight of your roots.”

“Wayne came from Wollongong but he could just as easily have come from Henderson or Huntly or Gore. He was this kid from the wrong side of the world with very little in the way of opportunities or resources who travelled to Europe and the US to take on and beat people he really shouldn’t have been able to compete with.”

“Wayne was a very aggressive rider,” says Crosby. “He had that dogged determination that you need to succeed. He was your typical Aussie battler, a bit of an Alan Bond character. Like most of us motorbike types he was a non-conformist. It takes a certain type of person to race at the top level. Team players get nowhere. You’ve got to look out for number one and he did that very well!”

Gardner will visit Hampton Downs as part of their HD Moto day, the popular initiative that offers amateur motorcycle enthusiasts regular track days. Gardner will be available to sign autographs and mingle with fans from 10.30 to 11.30am.

Gardner will also attend the New Zealand premiere of the movie at Rialto Cinemas in Newmarket on Friday, August 17 followed by screenings in Christchurch on Saturday evening and in Petone on Sunday. The movie goes on general release in New Zealand on September 13.