Hamilton eyes more wins in US this weekend

Hamilton eyes more wins in US this weekend 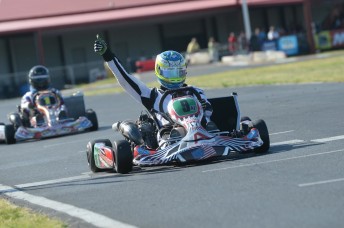 The multi-time New Zealand champion from Christchurch had a winning start to his 2014 US campaign in Texas in May, claiming a first up class win on the first day of double-header round competition only to be forced out of the Final on the second day when a reed block on his kart’s engine worked loose.

“Obviously having that bad race on the second day means this weekend is make-or-break if I want to beat the American number one Jordan Musser but the fact we are racing on an all-new street circuit will work in my favour,” the 31-year-old said from California this morning.”

The inaugural Pro Tour night round under lights in Modesto – a town made famous by the movie American Graffiti – is certainly a big deal with event and city officials creating a mini-festival around it on recently re-paved streets near the city’s CBD.

“This is not your ordinary street race, throwing up hay bales and a few fences,” Superkarts USA CEO Tom Kutscher said earlier this week.

“This is a complete racing facility that is being placed right in the heart of the city.

“We are talking well over a quarter of a million dollars invested into this project. (And) aside from the SuperNationals, this is the first opportunity that SKUSA racers will have to compete under the lights at night on city streets in front of true race fans.

“Any driver who wins this weekend will truly feel like an all-star. I can’t wait to see the karts hit the track on Friday.”

Hamilton, who this year is contesting the S4 Masters Stock Moto class for the California-based Aluminos team, will be one of two Kiwis competing, and three at the meeting.

Auckland Rotax category specialist and former Heavy class winner in the local Rotax Max Challenge, Aarron Cunningham, is keen to contest the SuperKarts USA Summernationals meeting in Las Vegas in November so has joined the Aluminos team to contest the TAG Masters class to get a feel for racing on temporary courses under lights.

“As such,” says Cunningham, ” I don’t have any expectations other than I would hope to be competitive.”

One thing all competitors will have to get used to is a lack of practice time with only four sessions per class on Friday before qualifying and heat races on Saturday and Sunday.

Those – like Cunningham – who have not raced under lights on a temporary circuit will also have to quickly adapt to the variable light conditions.

“It’s going to be all about who can pick up the track the quickest and which teams can work with all their drivers to find the best set-up and gearing to suit the tricky cambers and grip levels,” says Hamilton.

“The heat is also going to be a huge factor with temperatures reaching 39 degrees C most days here right now.”

The third Kiwi at the event this weekend is former SuperKarts USA S1 class champion Daniel Bray. This year Bray’s competition focus is on the KZ2 World Cup meeting in Europe later this year but the Aucklander, the GP Karts franchise holder in New Zealand, has accepted an offer to manage a GP Karts team from Mexico at the Modesto event.

The final double-header round of this year’s SKUSA Pro Tour is at the annual SuperNationals meeting in Las Vegas between November 19 & 23.