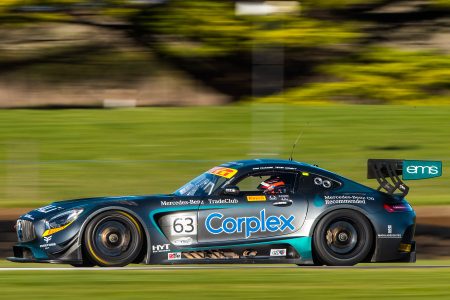 Mercedes-AMG driver Peter Hackett has been a part of the Australian GT landscape since 2005 and across that period been a regular visitor to the podium, culminating in the 2012 Australian Tourist Trophy and the 2017 CAMS Australian Endurance Championship title alongside New Zealander Dominic Storey, but so far, despite a sterling record that saw him finish runner up in his maiden season (and 2012), the Australian GT title has eluded him.

The popular Victorian though is intent about righting that wrong this year.

“The last 14 years we’ve come into the new season with a plan, and I’m sad to say that so far, the script hasn’t gone to that plan, so we’re looking to make a change this year,” he quipped.

“It has been a fantastic journey and to be able to campaign a Mercedes-AMG GT3 after my long-time relationship with Mercedes as their chief driving instructor is just icing on the cake, but for me, my goal is the championship after coming so close again last year.”

Hackett has been a regular at the top of the Australian GT points table since 2005, finishing second twice (2005/2012) whilst holding the mantel as the most successful driver across a single season (10 wins/2005 season).

Across the last three years – since the inception of the CAMS Australian Endurance Championship – Hackett and team-mate Dominic Storey have formed a formidable team, claiming the title in 2017 after finishing second the season prior. Storey was only able to contest a part season in the #63 Mercedes last season, again delivering a strong result, prompting a return to a season-long relationship again for 2019

“Dom has been integral to the success of our program at Eggleston Motorsport since we first joined forces in 2016, so it’s nice to start the season knowing we will take that experience forward and build on our past results,” Hackett admitted.

For a veritable veteran of the category, you could excuse Hackett for a casual approach to what will be his 15th year of GT competition, but you couldn’t be any more wrong..

“I’m possibly more fired up heading into the 2019 season than perhaps I’ve been since I first embarked on my GT career. We have a known package, an experienced team in Eggleston Motorsport and a driver lineup that has been very successful across the last three years, so I think we’re perhaps better placed to shake the top of the leaderboard than ever.”

Having narrowly missed the 2018 title despite at one stage leading the points race, Hackett knows that despite great pre-season preparation, anything can happen.

“We’ve always come into a season with a plan, but this year we’re just going to play each round on its merits,” he explained. “There are a number of unknowns this year including the new Pirelli tyre, plus a string of new cars that as yet are not homologated, so they could be rocketships, but we know what we have and it has proven time and time again to be equal to any challenge, so I expect we’ll be there right in the mix.”

As for the drivers likely to provide the greatest challenge, that too is an unknown.

“Funnily enough, I raced alongside Kenny Habul – who will also be in a Mercedes-AMG GT3 this year – in Formula 3 in the early stages of his career, so we’ve crossed paths before. Fraser [Ross] has been impressive in recent seasons and really thrown down the challenge and in a new car he will be one to watch again. Across the last 15 years I’ve had some great rivalries – John Bowe, Klark Quinn – it has been fantastic and always pushed me to have to develop my abilities even further which is something that keeps driving me on, and I expect this year to be no different.”

Heading into a new year, Hackett, Storey and Eggleston Motorsport will carry a stunning new look on the #63 Mercedes-AMG GT3, a livery which will be unveiled at Mercedes Melbourne on the Tuesday night immediately ahead of the car’s return to the Albert Park circuit.

The opening round of the 2019 season begins at one of Hackett’s favourite venues and his home circuit, Melbourne’s Albert Park Grand Prix circuit, with the first of four consecutive (across each day of the event) 25-minute sprint races taking place on Thursday, 14 March.