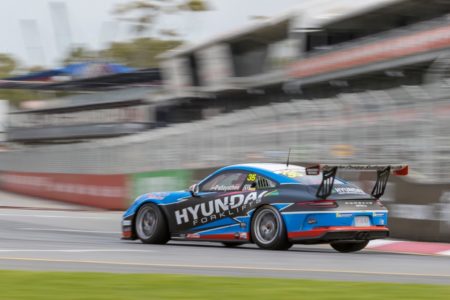 Garth Walden Racing will enter two Porsche’s into the combined NSW Production Sports and at Sydney Motorsport Park on March 6. The race will take place as part of round one of the 2021 Australian Motor Racing Series which sees a variety of National and State level categories competing over the weekend. In the 2018 Porsche 991 GT3 Cup car will be the familiar father and son pairing of Indiran and Duvashen Padayachee while Michael Sheargold will drive with team boss Garth Walden in the 2016 Porsche 991.

The race will begin at twilight and end under the complete cover of darkness, adding a unique night light element to the endurance event which is seen by many as a drawcard and a great use of the new lighting facilities at Sydney Motorsport Park.

Team boss Garth Walden will get behind the wheel once again at Sydney Motorsport Park, driving with Michael Sheargold, Walden sees the event as a great opportunity to keep progressing with Sheargold’s driving development.

“I actually haven’t raced the Porsche since 2016 when I was in Carrera Cup so I’m relishing the opportunity to get back behind the wheel and also coach Michael (Sheargold). Being in the same car on the same weekend really elevates the level of feedback and coaching that I can give him,” said Walden.

“I’m looking forward to the cool temperatures racing at night, it shouldn’t be too steamy in the cockpit. Starting at twilight might be a challenge though, as the sun sets it gets right in your eyeline as you’re coming down to turn one, so I’ll be keeping an eye on that.”

Michael Sheargold continues his rapid learning curve when it comes to motorsport, as he prepares to tackle his biggest event to date.

“This is a race of firsts for me, I’ve never raced at SMP with the new lights which will be a really cool experience. I’ve done a bit of testing, but I think with a group of cars around it’ll be a completely different atmosphere,” said Sheargold.

“Up to this point the longest races I’ve done are one hour long and they were with a co-driver! So really only 30-minute stints. Certainly, it’s been one of the main focus points in testing is making sure I’m able to maintain that level of concentration for long enough and I’ve been finding little things to help me in that area.”

Duvashen and Indiran Padayachee combine once again for a race together, the father and son pairing are upbeat about their prospects.

“I think we have a very good car, obviously we look at the quality of the field and we see some very good names, but the conditions should suit us as well. With the race at night, the temperatures should be a bit cooler, and we’ve found the Porsche tends to generate heat a bit quicker so we’re confident we’ve got the right car,” said Duvashen Padayachee

“The spectacle will be amazing, everything looks better under lights and the crew at Sydney Motorsport Park did a fantastic job as well the whole track is perfectly lit there’s no awkward dark patches which is comforting as a driver. I can’t wait to get out there, it’s going to be great to just get out on track for such a great event,” concluded Padayachee.