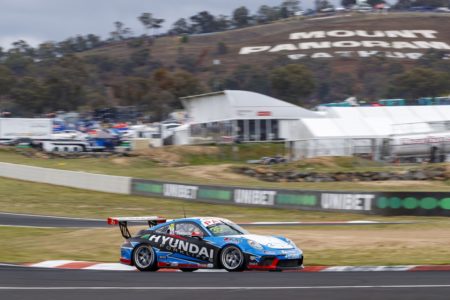 While the Porsche Carrera Cup Series has been on hold in 2020 due to COVID-19, the Aussie Tin Tops category has provided owners of various Porsche race cars with a place to compete.

GWR’s regular Porsche pilots, the father-and-son combination of Indiran and Duvashen Padayachee, have accumulated valuable seat time in the NSW Production Sports Car Championship in recent months and will be primed for an assault on the Mountain.

Rob Woods recently updated to a Porsche 991 Mk2 Cup car, which he raced for the first time in the previous Aussie Tin Tops round at The Bend and will also race at Bathurst.

“It feels a bit different to the Mk1 car, but I’m loving the extra torque of the 4.0L motor,” Woods said.

“I think the extra low-end grunt will be great for hauling the car up the Mountain!”

Joining the Padayachees and Woods in the Aussie Tin Tops will be Scott Taylor, who comes to the team with experience in a variety of categories including Carrera Cup, Australian GT Championship and even Aussie Racing Cars. A passionate racer on the track and a friendly personality outside of the car, Taylor is a welcome addition to the GWR squad; this weekend, he will drive a Porsche 911 GT3-R.

Completing the GWR Australia line-up this weekend will be Ollie Shannon, who will steer the Tekworkx Motorsport entry in the Toyota 86 Series races with backing from Seage Transport, Bondi Carpets and Ceilings by Design.

Shannon is a familiar member of the GWR team, having raced in the Porsche Michelin Sprint Challenge at the end of last season and also contested the final round of the MRF Tyres NSW Production Touring Cars Championship.

The full event schedule is below, with extensive coverage of both categories on FOX Sports and Kayo throughout the weekend.