GWR Mercedes A45 ready for redemption at PI

GWR Mercedes A45 ready for redemption at PI 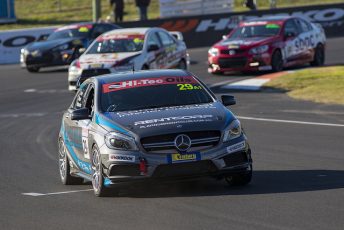 After making its debut at the 2017 Hi-Tec Oils Bathurst Six Hour – which doubled as round one of the 2017 APC season – the #29 Platinum Night Club Broadbeach Mercedes A45 run by GWR Australia is preparing to hit the Phillip Island Grand Prix circuit this weekend.

The September 8-10 event will feature four hours of racing around the picturesque Victorian circuit, and is the penultimate round of this year’s APC calendar.

The entry – which will be driven by Rob Woods and Indiran Padayachee this weekend – crossed the Bathurst finish line in third after six hours of intense racing, but was later relegated to sixth following a post-race penalty. Now, the team is back and looking to secure the A45 the APC podium position that it missed out on earlier this year.

“The Woods A45 is the sister car to the pioneering Searle A45 which was built to compete in the 2016 Bathurst Six Hour,” explained team owner Garth Walden, who thanked the Platinum Nightclub Broadbeach and Rentcorp Forklifts for their support of the entry.

“After seeing the potential in the AMG A45, Rob Woods – who also drives a Porsche Cup Car in the GT3 Cup Championship – decided he would like us to build one for him as well.

“Driven by Rob, Ben Porter and Duvashen Padayachee (Indiran’s son), the car debuted in the 2017 Hi-Tec Oils Bathurst Six Hour and crossed the line in third place, however a post-race penalty sadly relegated the car back to sixth.

“Powered by a two-litre, four-cylinder turbocharged engine and featuring drive to all four wheels, the Mercedes AMG A45 is a great contender for the diversity of APC and because the car has some serious horsepower behind it, it makes it perfect for the Phillip Island circuit in particular.

“The Phillip Island circuit is certainly a beast, but this car finished third after six hours around Mount Panorama, so we think it will go alright!”

While his confidence in the racing machine his team built is clear, Walden is also sure of the talent of those who will be driving it this weekend.

“Although only new to the game, Rob has proven to have a natural talent behind the wheel, and has been quite successful in his short time racing,” Walden said.

“Rob with share the driving with Indiran Padayachee, whose son Duvashen drove with Rob earlier this year in the Bathurst Six Hour. Indiran is an Australia Motorsport veteran and comes with years of experience, particularly in Porsches, so I expect him to be strong at Phillip Island this weekend.”

GWR Australia will field two entries in the penultimate round of the 2017 APC season this weekend, with both the Woods/Padayachee entry and the #24 GWR / HPS Transport Holden VE HSV SSV Redline of Michael Auld and Richard Bloomfield to be engineered by Blake Smith – current V8 Supercars Engineer for Nissan Motorsport’s Simona De Silvestro. Both entries have been built, run and maintained by GWR Australia.

GWR and the rest of the Australian Production Cars field will hit Phillip Island Grand Prix circuit this weekend (September 8-10) for what is the penultimate round of the 2017 APC season.