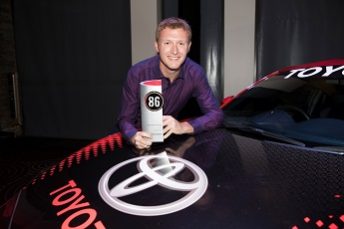 Dylan Gulson went wheel to wheel with New Zealand’s own Jack Milligan at Bathurst in October.

Now the 25-year old Aussie racer plans to return the favour and race in the Toyota 86 Championship at its opening round, held as part of the V8 Supercar race weekend at Pukekohe November 3-5.

Gulson is the latest racer in a family with a long and proud tradition of motor racing. During the 1980s and 1990s his uncles Ray and Paul contested premier races on both sides of the Tasman including the Bathurst 1000 and the Wellington Street Race.

Hot from his first ever win in the Australian Toyota 86 Racing Series, where he scored a dream ‘hometown victory at Bathurst, Gulson says he is looking forward to competing at Pukekohe as the V8 Supercar Championship rolls into New Zealand for this country’s largest sporting event.

He started his motor racing career in karts fifteen years ago and followed that with stints in a range of single make series. Gulson competed in the Australian 86 series in 2016, finishing sixth. He is currently 11th in this year’s series.

The Kiwi guest drive at Pukekohe is part of an ongoing relationship between Toyota Racing New Zealand and Toyota Racing Australia.

Long-term, Gulson’s aim is to secure a V8 Supercar or international GT drive.