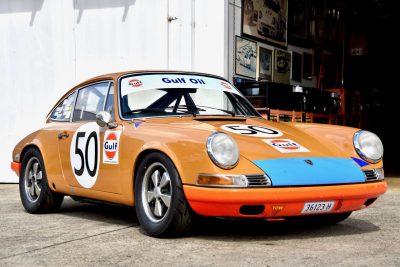 One of the most famous names in international motor sport, Gulf Oil, has taken on the sponsorship of ‘Group S’ motor racing in Australia to be known as the Gulf Oil Classic Sports Car Racing Series (Group S).

The Gulf Oil sponsorship of the category is great news for competitors, spectators and motor enthusiasts alike, as Classic Sports Car Racing (Group S) depicts the golden years of Australian motor sport especially during the 1950’s, 60’s and 70’s when amateur racing formed the basis of competition in Australia.

Classic Sports Car Racing (Group S) is an historic racing category administered by the Confederation of Motor Sport (CAMS) Historic Commission for production sports cars built between 1941 and 1977, and is split into three subgroups:

Some of these sports cars raced in production car classes in their heyday, including Australia’s famous Bathurst Hardie Ferodo 500 and Tooheys 1000 events at Mt Panorama.

Classic Sports Car Racing (Group S) cars are required to remain very close to original production specification. State of tune must be restricted in the interests of fair competition, safety, and authenticity. It also makes the competition accessible to regular motor sport enthusiasts and not just professional race teams.

Gulf Oil is a natural sponsor of this category as the company is especially remembered for its achievements in motorsport during the 1960’s and 1970’s including Le Mans wins and many other international successes.

Gulf Oil Australia CEO Mike Ridley-Smith, said the classic racing community identified strongly with the Gulf name because of its association with motor racing and some of the world’s most famous racing cars.

“Many race teams of that era achieved great success using Gulf’s specialised lubricants and we naturally wanted to extend that opportunity to the Classic Sports Car Racing (Group S) category in Australia to coincide with the introduction of the Gulf Oil brand in this country,” Mr Ridley-Smith said.

Gulf Oil has recently formed an alliance with a number of specialty Porsche workshops around the country that are now distributors of the quality Gulf Oil range. Other distributor enquiries are also being invited.

Customer and distributor enquiries for Gulf Oil products from classic and performance car enthusiasts and workshops are welcomed and should be directed to: