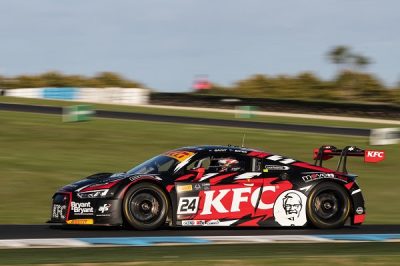 Australian GT Championship leader Tony Bates says he’s ready for an onslaught of tough competition when the series heads to Sydney Motorsport Park for the penultimate round this weekend.

The KFC/Moveitnet/C-Tech Laser/B&B/Local Roadways Audi R8 driver was catapulted to the top of the standings following his sensational win alongside Daniel Gaunt in the Phillip Island 101 endurance race, but Bates is refusing to get ahead of himself.

“It’s close at the top of the standings, and there are some very good drivers who we will be battling for the championship in the last two rounds,” Bates said.

“Coming into the weekend as the championship leader, I’m the one everyone will be trying to beat… but I’m ready for the contest.

“For us, the priority this weekend is to come away with a bundle of points, and make sure we’re in a position to fight for the title heading to the decider at Hampton Downs in October.”

As part of their preparation for the event, Bates and his Melbourne Performance Centre team participated in the one-hour Production Sports race at SMP earlier in the month, scoring the outright victory.

“We decided to compete in the Prod Sports race to gain some track knowledge, and we certainly learned a lot,” Bates said.

“We were able to experiment with the car setup and I was able to fine-tune my driving technique. It was nice to come away with the win as well.”

A 24-car field is entered for this weekend’s event, which will consist of three 40-minute races.

“Traffic management will be a factor this weekend,” Bates said.

“It’s a large field with cars from different classes, and there will be a significant speed differential between the fastest and slowest cars in the field.

“It will be challenging for the outright cars to navigate, but it will be exciting to watch.”

In a change from the usual three or four-day race meetings, this weekend’s round will be held over just two days as part of the Red Rooster Sydney SuperNight 300.