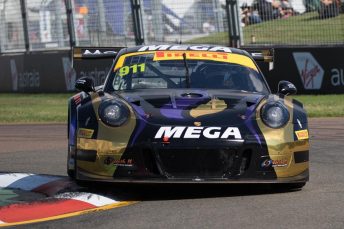 Liam Talbot is aiming to continue the consistency that has been the hallmark of his Australian GT Championship season heading into the final round of the series at Sandown this weekend, his MEGA Racing Porsche 911 GT3-R leading the points standings by 28.

Talbot is looking to add to his win tally in season 2017, having already won races at the Formula 1 Rolex Australian Grand Prix, along with the Perth and Townsville Virgin Australia Supercars events.

This will be the Brisbane-based racer’s second appearance at the outer Melbourne venue having finished inside the top 10 during both races of an Australian GT event in 2014 with Rod Salmon in an Audi R8.

Talbot believes the circuit will deliver a fascinating set of races on Saturday, with each marque represented in Australian GT having strengths in different areas on the Sandown course. His MEGA Racing Porsche, prepared by Walkinshaw GT3 is expected to be strongest exiting the hard braking corners that characterise the Sandown layout.

The usually fickle Melbourne weather could also play its part, creating a strategy lottery for drivers and teams.

The Australian GT Championship Title battle has been one built on strategy, consistency and picking key moments for both.

Talbot, the 2016 European Blancpain Endurance Champion and the Walkinshaw GT3 team have been able to navigate their way through most challenges this year.

The Australian GT Championship field has a gruelling schedule over the weekend, with three sessions to be conducted Friday to set the grid for Saturday’s first race. All three 40 minute affairs will take place on Saturday.

Championship points can be accrued during both of Friday’s qualifying sessions and all three races.

The race format includes one compulsory pit stop per race.

“Sandown is a really challenging circuit, even though it looks pretty basic on a map. The balance on downforce to ensure you are good out of the tight corners and aren’t trimmed out too much is pretty fine.

“With the different cars racing in the category not all having their strengths in the same area on the track, it shapes up as an interesting fight.

“The MEGA Racing Porsche will show its strengths in those tighter, punchier parts of the race circuit.

“The weather looks as though it is going to play a part in the outcome and generally, if it does rain it becomes a leveller, which I think will work to our advantage.

“After our performance at the last round of this Championship and the Australian Endurance Championship at Sydney Motorsport Park, we have a good balance with the car and some momentum going. That is something I am keen to continue.

“I’m excited by the weekend ahead. The entire team from Walkinshaw GT3, MEGA Limited and all our sponsors have worked so hard on this package throughout the year and to enter the weekend on top of the Championship is absolutely where we want to remain come Saturday night.

“On a personal level, it has been a big challenge to come back to Australia and put this program together after racing in Europe the last couple of years. The season has been one of true excitement and I think we’re going to get that this weekend, I guarantee that I will be giving it everything for everyone involved in our efforts in this Championship on Friday and Saturday.”