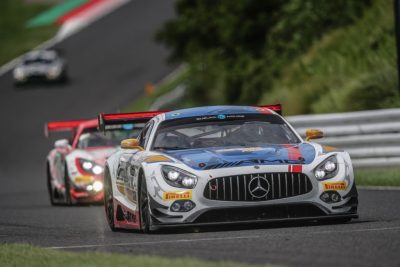 GruppeM Racing is carrying immense confidence into the remainder of the Blancpain GT Series Asia season, which resumes two weeks from now, off the back of the team’s utterly dominant victory in the huge Suzuka 10 Hours race in Japan just under a fortnight ago.

At the wheel of their immaculately prepared Gundam Series-backed No.888 Mercedes-AMG GT3, the star trio produced a faultless performance throughout the 10 hours of intense competition and GruppeM Racing’s mechanics and pit-crew did an equally exemplary job.

Heading the timing screens for nine of the 10 hours, Marciello, Engel and Vautier ultimately claimed victory by 31 seconds for GruppeM to add the prestigious Suzuka 10 Hours silverware to the squad’s already bulging trophy cabinet.

Tristan Vautier – Suzuka 10hrs Winner:
“I think we led something like nine of the 10 hours. It was flawless and actually felt like it was going too well at one point – something had to happen! It was perfect execution from the team, the car was strong all weekend and we knew we’d have a good chance if we just kept cool heads and managed everything well. Overall, I’m very happy and thankful to GruppeM and, of course, what a day for Mercedes-AMG – the car was so strong in all conditions.”

Sensational performance from GruppeM delivers deserved Suzuka success
From the outset in the two ‘Paid Practice’ sessions at Suzuka, GruppeM displayed front-running pace and Marciello ended the first of the subsequent Free Practice sessions second quickest, with the team third in the second ‘night’ practice thanks to Vautier’s best effort.

Unsurprisingly, the GruppeM entry carried its competitiveness through into qualifying with Marceillo securing a front-row starting slot for the big race, the highest placed Mercedes-AMG, setting the scene for a fantastic showing in the 10 hours itself.

Running in second position initially, the No.888 Mercedes-AMG GT3 took over the lead of the race early in the second hour when the pole position starting No.28 HubAuto Corsa Ferrari received a drive-through penalty.

During the remaining nine hours of action, GruppeM Racing led throughout with the only breaks being through the various driver-change and pit-stop cycles. Importantly, the team’s work in the pits was every bit as faultless as the driving on track from the squad’s ‘Platinum’ graded trio.

That said, the race wasn’t without some minor drama when a small flash fire broke out during the final pit-stop phase. Handled with the utmost professionalism by the pit crew, Marciello then went on to pull away during the closing stages and eventually took the chequered flag 31 seconds clear to spark giddy celebrations for GruppeM and Mercedes-AMG.

GruppeM almost secured the fastest race of the lap too with Engel only just missing out by a few hundredths of a second, he posted a best time of 2m03.759 seconds around Suzuka’s 5.8-kilometre International Racing Course.

Now, all attention turns to the resumption of the Blancpain GT Series Asia campaign and the team’s bid to retain its championship titles. Shanghai International Circuit in China will be the venue for the penultimate event of the season just a fortnight from how, on 22nd/23rd September.