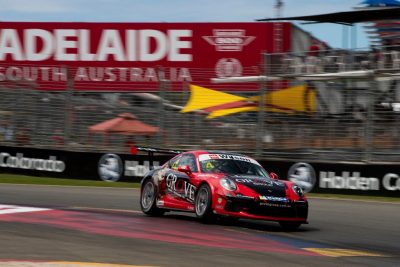 A massive weekend at one of the biggest Australian motorsport events of the year has come to a close with Grove Racing tasting champagne at the Adelaide 500.

Both Stephen Grove and son, Brenton Grove have done battle on the brutal Adelaide Street Circuit for Round 1 of their respective series’, as Stephen kicked off his seventh season of Porsche Carrera Cup Australia, while Brenton made his debut in the Dunlop Super2 Series.

A successful campaign for Stephen saw the two-time Carrera Challenge class champion open up his 2018 account with a round podium aboard the Grove Group backed, new generation Porsche 911 GT3 Cup car.

After claiming a second place finish in class for Race 1, Stephen went on to clinch another podium in Race 2 before scoring a third in class for the round, which ultimately delivered a healthy multitude of points towards his championship.

“Adelaide for is always a pretty tough track,” explained Stephen.

“I had pretty good speed over the weekend, but it was more about finishing every race and bagging some good points.

“If you can do a pretty good job on your weaker tracks, when you get to your stronger tracks it really helps you in the championship.

“The focus this year is clearly on finishing every race and creating points because that’s what wins you championships at the end of the day.”

Brenton’s debut weekend in Super2 got off to a compelling start, with the Melbourne-based driver looking to improve as the year goes on.

“For me, this was just a massive learning weekend,” said Brenton.

“It was my first proper race outing in Super2 and to start off on a street circuit like Adelaide was something else!

“We had a lot of fun on the weekend as a team, plus, I really enjoyed driving the Commodore around the circuit.

“I think we took a step forward from where we were in testing in terms of the car, obviously it’s something completely different to what I’m used to driving, but the Grove Racing crew gave me a good car.

“We’ll work on a few things over the next couple of weeks and look forward to the next round. Huge thanks to my sponsors for getting behind me this year.”

Porsche Carrera Cup Australia now heads to the Australian Formula 1 Grand Prix, where Grove Racing will be represented on a world stage (22-25 March).

Meanwhile, the Dunlop Super2 Series will head to Tasmania’s Symmons Plains Raceway for Round 2 (6-8 April).