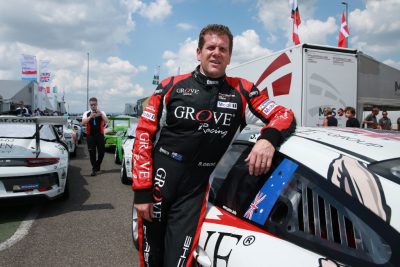 Stephen Grove returns home from success racing in Europe to his Australian motorsport roots for Round 5 of Porsche Wilson Security Carrera Cup Australia at Sydney Motorsport Park this weekend.

Grove arrives fresh off the back of two consecutive international weekends racing in Porsche Mobil 1 Supercup at Germany’s Hockenheimring and the Hungaroring in Budapest.

At the most recent of the two, the Melbourne-based driver battled his way onto the Pro-Am class podium, an achievement never before reached by an Australian in Porsche Supercup.

Returning to his home-land, Grove now has his focus firmly set on the Sydney race weekend where Carrera Cup Australia will tee up with the Asian Carrera Cup series for a joint event at the 3.93km circuit.

The weekend’s format mirrors that which featured in 2016 when the Western Sydney venue hosted the inaugural Carrera Cup Australia and Asia joint round, before last year’s second encounter at Malaysia’s Sepang International Circuit.

At that 2016 event, Grove took out the Australia-Asia joint Pro-Am race and will be looking to replicate his performance from two years ago this weekend where teams will race into the sunset.

In order to technically align with their Asian counterparts, Pro-Am drivers, including Grove, will disable ABS for the Saturday joint race, a challenge Grove is no stranger to.

Prior to that, however, Carrera Cup Australia will have a pair of individual 16 lap races earlier in the day which will also stand for series points in addition to the 10 points for competing in the joint race.

The experienced racer says he is excited to hit the track for the first session on Friday.

“It was great to get on the podium at Budapest, but I’m really looking forward to getting back to Australia and employing everything I’ve learnt in Supercup back into my Carrera Cup campaign,” explained Grove.

“We’re in a good position championship wise, but for me, I just like to focus on each individual race and do the very best I can in each race.

“Darwin was good for us, it was great to come out on top by the end of the weekend and bring home the round win, but now it’s eyes forward to Sydney.

“In 2016, we obviously won the joint race at Eastern Creek, but it’s not easy, that’s for sure.

“It’s great to be able to share the track with the Asian guys, so I’m definitely looking forward to that joint race on Saturday evening.

“I think all the racing I’ve been doing overseas should hold me in good stead for the joint race. Obviously, in Supercup you don’t have the option to use ABS so I’m quite used to driving these new cars without it.

“I don’t think it should affect me too much.”

Qualifying and all races will be broadcast Live nationwide on Fox Sports 506, with Carrera Cup supporting the Red Rooster Sydney SuperNight 300.

Qualifying and all of the races will be shown Live on Fox Sports 506 across the weekend.