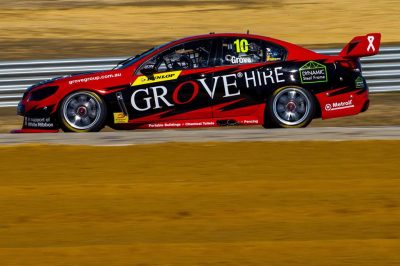 Brenton Grove is leaving Round 3 of the Dunlop Super2 Series at Perth with a spring in his step following an immense weekend of learning with new mentor Steven Richards.

It marked Grove’s first visit to Barbagallo Raceway, with the short, technical 2.4km layout offering a fresh challenge for the 21-year old.

The weekend started off strongly when Grove finished second practice just outside the top ten in 11th.

A difficult qualifying session, however, saw the Melbourne-based driver fall back to 18th on the grid for Race 1.

When proceedings got underway in the opening race of the weekend a small mistake on the opening lap dropped Grove down the field and the loss of track position made things more difficult for the remainder of the race.

Across the weekend, Grove worked extensively with Richards in and out of the car and maintains he was not particularly focussed on results, but more so learning from his seasoned mentor.

“The weekend yielded a lot more progress than the results showed,” reasoned Grove.

“Small mistakes from me didn’t allow me to get results on the scoreboard, but the feeling in the car is better than ever.

“We stuck to our own plan over the weekend and really ticked off everything we set out to achieve – now it’s just about implementing them with less mistakes.

“The track was tricky with the tyre degradation being so high, however, the tyre managed to stay on the car quite well so that is another positive.

“I also made some good progress working within the team, having Steve come onboard was definitely a big help”

With a lengthy break between Perth and the next event in Townsville, Grove will be looking to reflect on last weekend and consolidate his knowledge for the Townsville event.

“The plan is to do some testing in the break,” added Grove.

“It will be good to stay sharp and really build on progress we have made.

“It was also allow me to further the continuity with Steve and to help us understand each other even better.”

Round 4 of the Dunlop Super2 Series takes place on the streets of Townsville from July 6-8.