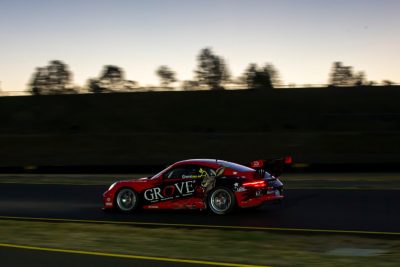 Stephen Grove’s weekend in Round 5 of Porsche Wilson Security Carrera Cup Australia at Sydney Motorsport Park was highlighted by a class win on the Saturday of the event.

The reigning TAG Heuer Pro-Am champion claimed the class honours in Race 2, impressively battling his way up to the top spot.

It followed a resilient start to the weekend, with Grove qualifying fifth in class on Friday afternoon.

The Melbourne-based driver managed to fight back however, improving to third in Race 1 before taking out the Pro-Am victory in the second championship race of the weekend.

Following that, Carrera Cup Australia and counterparts Porsche Carrera Cup Asia combined for a pair of joint races, with the Class B drivers from both series duking it out in an exciting twilight race around Sydney Motorsport Park.

Due to a number of incidents on track, the race was unfortunately run mostly under the safety car, with Grove sitting inside the top ten for much of the encounter.

He then picked up a puncture mid-way through the race from debris which originated from a preceding incident, before Grove was forced into pit lane to change the tyre, crossing the line 18th outright and ninth of the Carrera Cup Australia cars.

The Victorian has now vaulted to the lead of the TAG Heuer Pro-Am points standings, 20 points clear of title rival Roger Lago.

Despite the up and down weekend, Grove says he is leaving Sydney pleased with the overall outcome.

“I was really happy to end the second race on a positive note. Having not tested there with everyone else a few weeks ago we were on the back foot a little going in,” explained Grove.

“Qualifying was quite tricky and I think we were a little out of sync most of the session. It was so tight at the top and P5 was all we could really do.

“I’m really happy with the effort of the whole team, we worked hard Friday night to ensure we came back out stronger than ever Saturday; I’m really pleased to end the weekend how we did.

“The Pro-Am race was quite a spectacle. To race with the best drivers in Australia and Asia was another awesome experience, just a shame we had the puncture.

“However, it wasn’t really for points so we all still had some fun.

“We have some good momentum to hopefully take forward into the first race at The Bend. We can’t wait to get there in a couple of weeks.”

Porsche Wilson Security Carrera Cup Australia and Grove Racing now gears up for its next event, with Round 6 of the series taking place in South Australia.

Grove will take in the brand-new The Bend Motorsport Park in Tailem Bend from August 24-26 in support of the inaugural OTR SuperSprint at The Bend Supercars event.