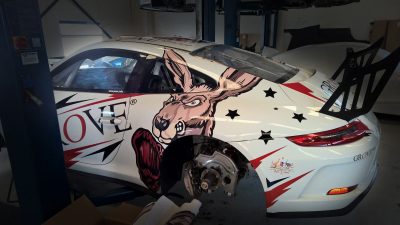 Stephen Grove is set to become only the second ever Australian driver to climb the one-make Porsche Pyramid when he takes on this weekend’s Porsche Mobil 1 Supercup round at the prestigious Monaco Grand Prix (24 – 27 May).

As announced in April, the Melbourne-based driver will make his debut in the series, as well as turning his first laps on the perilous Monte Carlo streets after receiving the opportunity to compete the event with French outfit Pro GT by Alméras.

A livery which Grove Racing fans will know well features on the Supercup car, with the iconic Australian Boxing Kangaroo plastered across the sides, similar to that which Grove steered victory in class at February’s Liqui-Moly Bathurst 12 Hour.

The Grove Group will also feature branding on the car.

Grove, who is a two-time Carrera Cup Australia class champion, says he is eager to hit the track.

“It’s a massive challenge and I’m just really looking forward to getting over there,” said Grove.

“We’ve got no onboard video to look at, but we’ve been lucky enough to acquire heaps of valuable car data and also my simulator work has been pretty extensive over the last month and a half.

“I’m excited to get over there and really take the challenge on.

“There’s only forty minutes of practice, so I’ve got to be on it pretty quick to get up to speed,” he added.

“Most of the guys on the Supercup grid have been there before and I haven’t, but that’s a part of learning, a part of racing in a different country, a different series and with a different team.

“For me I just like the evolution of continually challenging myself and trying to get better in a cup car.

“I’ve been in a cup car for so long now because I just don’t think that I’ve quite mastered it yet – I want to keep going in a cup car and the best way to do that is to keep challenging myself on tracks overseas in different environments.

“Heading into the weekend now, my mindset is just on doing the best job I can and trying to learn as fast as I can and to be there or thereabouts.”

The weekend marks Grove’s second outing with the Pro GT by Alméras squad after he took part in a Carrera Cup France event at the spectacular Spa-Francorchamps in 2017 alongside the team.

“I ran with the Pro GT by Alméras crew at Spa, when I raced there in 2017,” explained Grove.

“We’ve got a couple good pro-drivers in the team; take Julien Andlauer for example, who won the French Carrera Cup championship last year.

“I’ll be following their direction pretty closely and just trying to have the set-up of the car the way I like it to react.

“So, we’ll try and get a balance between both. We only have really a limited time to set the car up, it’s really going to be more about learning the track.”

The Monaco Supercup race weekend begins with a sole practice session on Thursday ahead of Qualifying on Friday and finally, a 16-lap race on Sunday.

Eurosport is set to broadcast the full race Live in Australia at 18:15 AEST on Sunday (27th May) evening which takes place hours before the prestigious Formula 1 Monaco Grand Prix.

Head over to our social media pages for updates across the weekend.