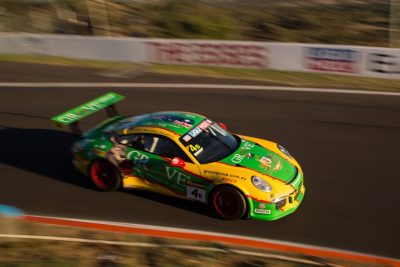 All four drivers contributed to what was a unique win in Porsche Class B, crossing the line over three laps ahead of the next class finisher, completing 260 laps.

Gaunt, who was the nominated fourth driver, helped to clinch the trophy with a number of impressive stints from the New Zealander.

The Melbourne-based team’s success began on Saturday, with the squad securing the class pole by 1.2 seconds after Barker lapped the Mount Panorama Circuit in a staggering 2:08.071s, an extremely quick lap time for a Cup car around the venue.

From there, the weekend continued to rocket skywards, as Barker cleared off out-front in the class lead in the opening minutes of Sunday’s 12 Hour race.

When the checkered flag dropped at the end of a grueling, but rewarding four-wheel marathon – which included a phenomenal stint by Brenton towards the end of the race, who pushed through an illness to retain the lead – the team celebrated the exceptional achievement.

The combination of Barker, Gaunt and father and son, Stephen and Brenton are stoked with the result and feel it was a special victory.

“These races are really hard to win, so I don’t take anything for granted,” said Stephen.

“In the past six years it’s been quite good, we’ve had two seconds and three firsts, so to come here with my son Brenton and not only race with him but win with him is quite special.

“For him to learn how hard a twelve-hour race is – it’s very hard – there’s a lot of ups and downs, you’ve got to be consistent, got to make sure the car’s good, manage traffic, manage your driving time – it’s very, very hard to do.

“So, to win three is pretty special.”

“We spent a lot of time and effort planning for the event trying to make sure we could achieve the best possible result and obviously we brought Ben Barker because he’s an incredible steerer.

“In the end, we got there and I had a lot of fun doing it especially as it was my first-time racing at Bathurst.”

“This weekend was just mega amazing, I love coming over here to Australia and racing with the Groves.

Everyone on the team did a stellar job and we ended up on the top step of the podium which is awesome!”

Grove Racing will now prepare for the Porsche Carrera Cup Australia series, which kicks off at the Adelaide 500 from March 1-4.