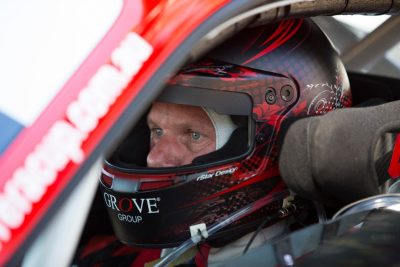 Stephen Grove and Grove Racing will make an appearance on the world stage this weekend for Round 2 of Porsche Wilson Security Carrera Cup Australia at the Australian Formula 1 Grand Prix.

Supporting the Formula 1 season opener at Melbourne’s Albert Park Circuit, the 2017 TAG Heuer Carrera Challenge class champion will be chasing success after a strong showing last time out at the Adelaide 500.

Grove bagged solid points for the Adelaide round towards his 2018 class championship challenge, with a third place for the weekend.

The Melbourne-based driver now looks to the fast flowing Albert Park Circuit, a venue he clean swept in 2017, taking all four race victories in class.

“I really enjoy driving at the Grand Prix, it’s essentially my home circuit so it’s great to be able to stay at home and then come and race around roads I normally drive around,” said Grove.

“The circuit probably suits my style more than Adelaide does with the fast and flowing corners. I really enjoy the track and its very similar to the sort of circuits I’ve spent a lot of time on overseas.

A new challenge for 2018 has been adapting to the new generation Porsche 911 GT3 Cup, which was introduced at the start of this season.

However, despite gaining valuable experience behind the wheel of a similar model car competing in the 24H COTA during November last year and the Dubai 24 Hours in January, Grove believes the field is on a level playing field now.

“The car is very similar to the previous generation car in a lot of ways,” added Grove.

“Everyone has been doing lots of testing in it so I think we are all at a level playing field. It’s a very competitive grid this year so whoever manages to get everything together will most likely come out on top.”

Round 2 for the series at the Australian Grand Prix kicks off with practice for Carrera Cup Australia on Thursday at 12:20pm local time.

Race 1 sees the green flag later in the day at 18:40 local time, ahead of another three races stretched across the weekend.