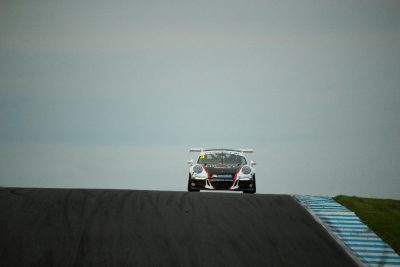 Currently running second in his class’ standings, Grove is looking to build on his strong performances in the opening two events of 2018.

The Melbourne-based driver secured multiple class podiums in the season opener on the streets of Adelaide, before going on to take pole position and a pair of race victories in his home event supporting the Australian Grand Prix.

It puts Grove in the box seat as the Carrera Cup season really begins to hot up, with six rounds, including Phillip Island, still remaining.

The defending champ is confident heading into this weekend’s event as he prepares to jump back behind the wheel of the Grove Group backed Porsche 911 GT3 Cup.

“I’m really excited to get back in the car, we’ve had a little bit of a break since AGP,” Grove said.

“We all tested at the Island a couple of weeks ago so it was great to be able to get a run in the new car there before the race weekend.

“So far we’ve had some really good speed, the guys have done well to get their heads around the new car – luck hasn’t been on our side but hopefully we can turn that around this weekend.

“I really enjoy the Island, it’s quite a different track layout to what we normally have and it requires a different technique. It will be interesting to see how the field is positioned this weekend.”

The last time Grove raced at Phillip Island was in May last year for the Carrera Cup Pro-Am event where he shared the car with Supercars star Tim Slade.

However, he is far from short on track experience with the 4.44km venue regularly used by Grove Racing for test days.

This weekend, Carrera Cup will feature two 25-lap (111.13km) races across Saturday and Sunday, both of which eclipse the previous record of a single-driver endurance race.

While it may be physically and mentally demanding, the event format, coupled with the unique fast, flowing nature of Phillip Island’s circuit; is a challenge Grove is is eager to tackle.

“Normally whenever we come to Phillip Island it is in the form of two drivers in the Pro-Am event,” added Grove.

“It will be good to have the car to myself again this weekend, albeit with some longer races than normal.”

Track action from Phillip Island kicks off on Friday with a pair of practice sessions before qualifying on Saturday morning.