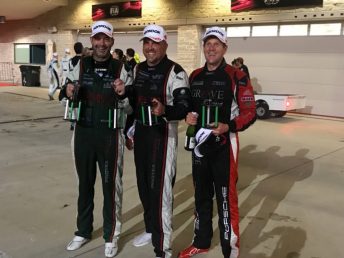 Stephen Grove has scored a podium place finish in the 24H COTA alongside co-drivers Danny Stutterd and Sam Fillmore after an impressive performance in the gruelling American endurance race.

Grove competed the event at Texas’ glorious Circuit of The Americas aboard a new generation Porsche GT3 Cup Car in the 991 class with Freem USA, a team partly run by Ash Seward Motorsport.

The all Australian/New Zealand trio crossed the line second in class, and an exceptional 10th outright after making up a position in Part 1 of the race, running 11th outright in the early stages.

A stellar stint by Grove in the night hours of Part 1, saw the Melbourne based driver carve through traffic as he drove on through a slight power steering issue.

The 2017 Porsche Carrera Cup Cup Australia class champion is happy with the weekend and is proud that the team was able to adapt through the power steering issue.

“The whole team did a great job to diagnose and adapt to the problem,” said Grove.

“The other boys [Stutterd and Fillmore] were able to push on and hardly let the problem affect their rhythm.

“It was so much fun to drive with Danny and Sam, they’re great guys who really look to enjoy their racing.

“They did a flawless job all weekend – I’m so thrilled with the result.

“It was so valuable to drive the new car over there. There were only a few little differences between it and my Carrera Cup car that I’ve been racing this year in Australia.

“I was able to pick up on all of them and I feel comfortable in it now, so I’m excited to jump back in it again soon.

“The circuit was awesome, the elevation changes and fast flowing corners were such a thrill and It was so much fun to learn another new F1 circuit.

“I can’t wait to get back to the Bathurst 12 Hour next year, we have some big things in the pipeline coming up”.