Grove awarded at ‘ferocious’ Fuji round

Grove awarded at ‘ferocious’ Fuji round 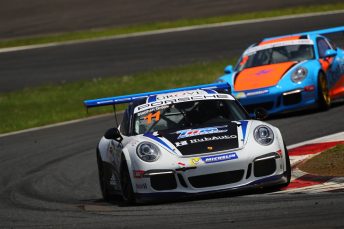 Stephen Grove has made yet another international Porsche one-make appearance at Japan’s Fuji Speedway as part of the Porsche Carrera Cup Asia championship.

In what was his first time in Japan, the Australian qualified 19th on the 25-car grid for the opening race and moved through the field to place 13th outright by the finish and sixth in the Pro-Am classification. Grove’s charge through the field earned the Victorian the Outstanding Performance Award, the series’ recognition for the driver who gains the most positions during the race.

Grove continued his impressive form in race two, again moving from 19th on the grid to place 13th outright – this time finishing fourth in the Pro-Am class – and again receiving the Outstanding Performance Award for the most positions gained in the race.

“It was another fantastic weekend. The racing was just ferocious every race. The level of competition among the Pro-Am drivers was excellent and we were racing bumper to bumper, door to door, with no one hitting anyone. It was good, clean, but ferocious, racing,” said Grove.

“It was great to receive the Outstanding Performance Award in both races for passing the most cars. I didn’t qualify too well so it was great to pass a few cars during the races. The joint race was more difficult as I had to start towards the back of the field. With that many cars on track it was very hard to pass. It was a bit of a precession but still very enjoyable racing within such a huge field.

“It was a great event off track too; Jacky Ickx was there as a guest of Porsche and was amazing to chat with.”

Grove now returns to Australia to attend this weekend’s Porsche GT3 Cup Challenge Australia round at Winton Motor Raceway, where his son Brenton will continue his GT3 Cup Challenge campaign in round three of the series, before Grove Racing heads north to Darwin’s Hidden Valley Raceway for round four of the Porsche Carrera Cup Australia championship.

“Fuji Speedway is a good mix of fast, flowing sections with some very technical corners. The event was great preparation for Darwin next weekend; both tracks have a very long straight, heavy braking sections and free flowing elements. I’m looking forward to it.”