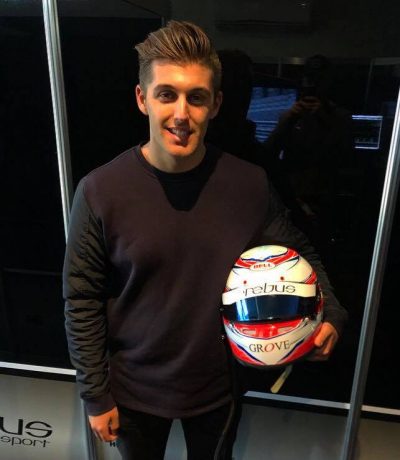 De Pasquale, who currently drives in the Virgin Australia Supercars Championship for Erebus Motorsport, has been frequently labelled as one of Supercar’s best current young talents.

His debut season, which began at the Adelaide 500 in March this year, has been highlighted by a number of impressive performances from the rookie, including his maiden top ten finish at the WD-40 Phillip Island 500.

The announcement comes ahead of this weekend’s Winton SuperSprint.

With branding across the front of the 22-year old’s helmet, the Grove Group are excited to form this strategic partnership with De Pasquale.

“It’s awesome to be partnering up with the Grove Group,” said De Pasquale. “They’re passionate about their motorsport with Stephen racing Carrera Cup and Brenton in Dunlop Super2.

“The support they show for young drivers trying to make their way in Australia is pretty cool and I’m thankful to be a part of it.

“I’m really looking forward to a long and successful partnership.”

The Grove Group have supported McLaughlin from the start of his Supercars career, featuring branding on his helmet and team race suit.

“He’s proven his credentials this year in the Supercars Championship and is definitely someone we wanted be associated with.

“He fits our image really well and will do an excellent job promoting the brand. We are excited to have him on board.

“We try to align ourselves with promising young drivers, helping them in the early phase of their career, and Anton is no different.

“I’m looking forward to being a part of his career progression and supporting him along the way.”

Both De Pasquale and McLaughlin will be on track this weekend for Round 6 of the Virgin Australia Supercars Championship at Winton Raceway in rural Victoria.

Next Story Michelin back on top at the Nürburgring