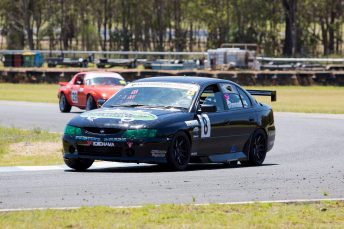 Improved Production QLD competed in the final round of their 2016 championship.

It started off shaky for 2 championship contenders. Steve Jukes unfortunately had an engine issue in Friday practice and would return to Brisbane for an engine change to keep in the hunt, while David Homer lost an engine in Qualifying – he would not compete for the remainder of the weekend.

The grid for the weekend was set with Justin Keys on pole, Tony Isarasena second, and James Peck in third.

Keys was pounced on off the line in race 1, dropping back to third by turn 1 but would manage to gain the lead at the completion of lap 1. Grimmond would climb his way up to second after qualifying fourth for the race, Isarasena filled the final podium spot.

Grimmond, Isarasena and Peck would battle it out all weekend for the podium positions.

A great dice back in the pack between the under 2 litre racers would have David Waldon, Greg Hartnett and D’Arcy Wade all fighting it out for the top spot.

Grimmond has taken out the Over 2 Litre 2016 IPRA Championship with Jukes and Homer rounding out the podium spots.

“It was a nervous round”, Grimmond said at the conclusion of the weekend.

“With leaving for Phillip Island (IPRA Nationals) in two days, I had to race conservatively and look after the car”.

“A win and two seconds, I couldn’t of asked for a better weekend. I feel honored and privileged to be IPRA club and CAMS QLD number 1”.

“Thanks to Hi Torque Performance, Pristine Smash, Grimmo’s Garage, Pam and my family for all their support”.