Grid Kids gear up for the opportunity of a lifetime

Grid Kids gear up for the opportunity of a lifetime 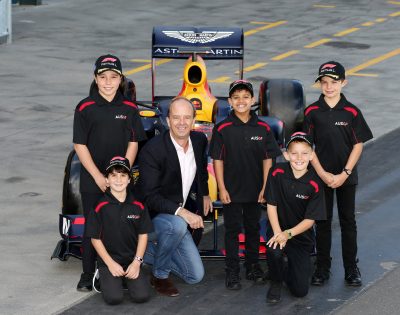 While children have previously been official flag bearers representing drivers’ nations, 2018 marks the first time this opportunity has been extended to 40 young aspiring Grid Kids, who will now play an integral role as part of the pre-race grid activities.

The Grid Kids, consisting of 40 young motorsport competitors from around Australia, aged between 8 – 18, were selected by Karting Australia (KA), together with the Confederation of Australian Motor Sport (CAMS).

Minister for Sport, Tourism and Major Events, John Eren MP, said it’s great to see some of our future motorsport stars getting in on the action as part of the first Grid Kids line-up.

“This will be a special opportunity to get up close and personal with their heroes – an experience they’ll never forget,” Minister Eren said.

“Victoria has the best of everything, including the best car race in the world – and that means more visitors, more jobs, and a massive boost to our state’s economy,” he said.

AGPC CEO, Andrew Westacott, is delighted that in our role as the opening race of the season, we get to pioneer the entry into this new era of Formula 1®.

“These young Australian drivers are the future of motorsport in our country and we are excited to have the Grid Kids on the grid for this once-in-a-lifetime opportunity,” Westacott said.

“Formula 1® is the pinnacle of motorsport and it will be the ultimate experience for these young kids to stand next to their heroes before the race starts,” he said.

Five-time MotoGP™ World Champion and Karting Australia Chairman, Mick Doohan AM, believes that this is just what we need to encourage and inspire future generations of Australian motor sport champions.

“There’s nothing more inspiring than being up close to those who have fulfilled your ambitions, which is why we are thrilled to be able to provide this opportunity to some of our karting champions and aspiring young racers,” Doohan said.

“We are really excited about the opportunity that this year’s group of Grid Kids will be able to experience at Albert Park,” Arocca said.

“An experience like this can give young kids a small taste of what life is like at the pinnacle of world motor sport and will no doubt help inspire them to continue on reaching for their dream as they climb through the motor sport ranks from karting, to Formula 4 and potentially, some of this group may one day be the next Daniel Ricciardo or Susie Wolff,” Arocca continued.

Eight-year old karting enthusiast, Lewis Francis, is one of the lucky Grid Kids whose dreams have been made a reality.

“I’m very excited for next weekend, I don’t think I’ll be able to think about any of my school work this week,” Francis said.

“To be able to stand on the Formula 1® grid is a dream come true. I love racing and Formula 1® is the ultimate in the world of motorsport, one day I want to be out there racing myself,” he continued.