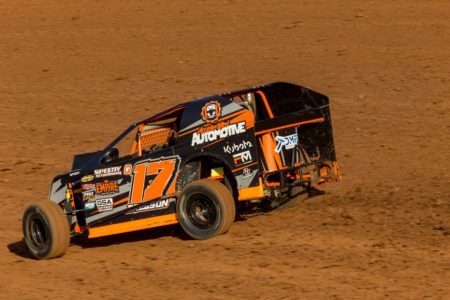 Gregson and his team made the long trip south from Bundaberg in Queensland to contest the South Australian Title, and they were rewarded for their efforts with a third-place finish on the podium.

“Early on in the feature race, I didn’t the best of starts and lost a handful of positions, but I managed to keep my composure and work my way back into podium contention. I was able to have a great battle with a few drivers, such as current Queensland Champion Sean Rose, for the final spot on the podium.”

Gregson was quick to praise both Justin and Chelsea Fankhauser, who are his major sponsor through their business Accelerated Automotive in Bundaberg.

“Without the great support from Justin and Chelsea, I simply wouldn’t be able to go racing at the level that I do,” he praised.

“Justin is not only a sponsor but my right-hand man on the race car – both at the track and in the workshop. He is always working hard to make sure my race car is in top shape every time I hit the track.”

In what is Gregson’s third season in the Modlites, after stepping into speedway following five years in Drifting competition, the South Australian Title podium was a new career highlight for him. Prior to this podium result, other highlights for Gregson were a feature-race win at Maryborough Speedway, along with qualifying on pole position for last season’s Australian Title at Kingaroy Speedway (Qld) and in his first Modlites season (2017-18) picking up a third-place finish in the Cowboy Cup Series point standings and also the Rookie of the Year award for the Queensland club.

Gregson’s next major event is going to be this Sunday night’s Victorian Modlites Title at Simpson Speedway. For the second weekend in a row, Gregson and the team will be making the massive journey south from their Queensland base.

Special Thanks: Justin and Chelsea Fankhauser, his parents Kris and Bob Gregson, and Bevan Collins.