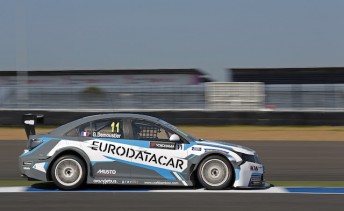 MEDIA RELEASE: Craft-Bamboo Racing has reached the Losail Circuit in Qatar where, Grégoire Demoustier, will be competing in the series’ first ever night race. After an independent podium in Thailand, Demoustier will be looking for a similar result this Friday to end his first touring car season on a high.

It is the championship’s first visit to the Middle East and another new track for Demoustier, who is hoping the new circuit will level the playing field with the other drivers. His determination to break into the second qualifying session is strong after his performance in Thailand saw him grace the independent podium in race one. This helped the young driver to collect some more world championship points and provides extra motivation for a season final push in Qatar.

The Frenchman will do battle against the other independents under the floodlights this Friday in a final fight to determine the finishing order for the Yokohama Drivers’ Trophy. Demoustier made a move up the independent leaderboard last weekend and is now only two points behind Tom Coronel who he hopes to catch on Friday. With the track unknown to most drivers, Demoustier will be fighting for every tenth in qualifying with the aim to squeeze into Q2 and take reverse pole for race two.

Craft-Bamboo Racing’s World Touring Car Championship campaign would not have been possible without the support of, Eurodatacar, Ravenol, Gravity, Musto, Team Dynamics and Orangebus.

“It has been a challenging first season for me and getting used to the FWD setup hasn’t been easy but I have learnt a lot and Craft-Bamboo Racing have supported me throughout. I am really looking forward to the first ever night race and I hope that I can finish the season with a good result.”

“It will be great to end Greg’s first season with the WTCC’s first ever night race in Qatar and we have seen what he is capable of in Thailand. Hopefully Greg can get acquainted with the Losail circuit quickly and take the fight to other independent drivers on Friday night.”