Greenbury and Pringle return to top at Warwick Pro Tour

Greenbury and Pringle return to top at Warwick Pro Tour 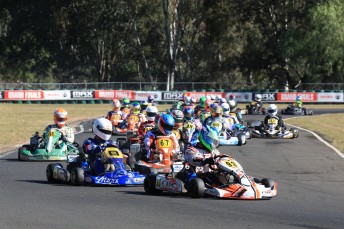 Former Team Australia team mates Tyler Greenbury and Jason Pringle have returned to the top of the podium in their respective categories amongst a string of closely fought out finals as the penultimate round of the 2014 Rotax Pro Tour wound up at the Sandy Creek Raceway in Warwick.

On the back of two heat race victories on Saturday, Hunter continued his battle with Project X Racing’s Steve Ellery throughout the race with Hunter taking the win and Ellery securing a close second.

Tony Kart pairing Hamish Leighton and Tony Bregonje both continued their impressive Saturday form by taking third and fourth respectively in the day’s first race while Lee Adams and Cameron Harch both improved from their heat race results to secure fifth and sixth.

The battle between Adam Hunter and Steve Ellery resumed in the 22 lap final as the pair continually fought for the race lead throughout the first half of the event, though a late race charge by Hunter saw him open up a comfortable lead in the latter stages, by his own admission, the round victory was not easy.

Ellery managed to continue on in second through to the chequered flag, sharing the podium with Hunter and Tony Bregonje who secured his first ever Pro Tour top three round result. Lee Adams improved from his pre-final result by taking fourth while Hamish Leighton rounded out the top five.

An encouraging battle at the front of the Sodi Junior Max Trophy Class pre-final tested the skills of the drivers in the one make category with a continued challenge for the first six positions in the race.

Glen Ormerod broke away to an early lead in the 18 lap race while West Australian Brooke Redden showed his strong form to challenge Ormerod and Chris Bregonje for the race lead. Cameron Shields continued to show impressive race pace in amongst the top six throughout the race along with Jye Hopkins and Hudson Heath.

A late race change of position saw Brooke Redden move to the front of the field and collect the win ahead of Bregonje and Ormerod, with Shields and Hopkins completing the top five.

A post-race penalty for Redden relegated him to eighth, handing the race win and pole position for the start of the final to Chris Bregonje.

The battle of the top six drivers returned in the final with Glen Ormerod breaking away to an early lead over his fellow competitors.

A charge from eighth by Brooke Redden saw him challenging in amongst the group behind Ormerod which also featured Cameron Shields, Hudson Heath, Chris Bregonje and Jye Hopkins.

As Redden moved his way through to second, the rankings leader managed to reel in the lead of Ormerod, with a last lap change of position behind the pair seeing Hudson Heath progress to third ahead

of Chris Bregonje and Jye Hopkins as Cameron Shields ended his race prior to the finish.

Glen Ormerod went on to take the race win with the top five podium featuring Redden in second ahead of Heath, Bregonje and Hopkins.

On debut in the Rotax Light category, Queensland’s Nicholas Andrews was the strongest of the large field in the pre-final as he drove to his first ever victory in senior karting.

Andrews’ result came on the back of a mixed day throughout the heat races on Saturday, though the win wasn’t easy for the RK Kart driver with continued challenges being delivered by Liam McLellan, Jordan Boys and Andrew Carey.

While Andrews went on to take the win, McLellan was able to secure second with Boys and Carey finishing third and fourth respectively.

Tyler Greenbury returned from his two heat race wins on Saturday to progress to fifth, handing him a third row start for the final alongside Reece Davidson who finished sixth.

The experience of Tyler Greenbury showed through in the Rotax Light final, after starting fifth the former Team Australia driver drove a strong race to secure the lead and didn’t look back with continued changing of positions occurring behind him to complete the podium.

After his consistent top six results throughout the weekend, Jordan Boys managed to finish second behind Greenbury while Liam McLellan

completed the podium in third.

Brad Jenner drove from 12th at the start of the race showing strong pace aboard his RK Kart to finish fourth while Jack Richardson and Nicholas Andrews finished fifth and sixth.

After his two heat race wins on Saturday, Darwin’s Bryce Fullwood started in pole position in Junior Max for the category’s first combined race of the weekend following the heats being run under the split grid system.

Fullwood secured a strong start with the FA Kart driver pulling away early, though the battle for positions behind him remained at a premium down to the finish.

Callum Walker managed to step up and secure second by the completion of the race with heat race polesitter William Brown taking third.

Jayden Ojeda, Zane Goddard and Isaac Vaccarella completed the top six also giving themselves a strong chance in the final starting from the first three rows.

Following on from his unstoppable performance in the pre-final, Bryce Fullwood again skipped away to an early comfortable lead in the Junior Max final with the Northern Territorian showing his strong form behind the wheel in amongst Australia’s premier Junior Rotax drivers.

holding the position through to the end finishing behind Fullwood however the race for third place came down to the final lap with Victorian Aaron Cameron capitalising on a racing incident in amongst the
battle for the minor placing’s as the Formula K driver stepping through to take third ahead of Birel driver Mitchell Maddren in fourth, CRG’s James Litzow in fifth while Hunter McElrea made it two Birel Karts in the front group by finishing sixth.

Albury’s Jordan Boys was able to back up from his impressive form throughout Saturday’s heat races and capitalise on his front row start in the DD2 pre-final by taking victory in the 18 lap race.

Boys was continually challenged by the experienced Jason Pringle and fellow Victorians Adam Lindstrom and Troy Woolston, though the 16 year old Praga driver was able to eventually break away to a secure lead in the final stages of the race and collect the chequered flag. Pringle managed to finish second in his CRG Kart, thus joining Boys on the front row for the start of the final while Lindstrom and Woolston finished third and fourth.

The challenge for the lead in the DD2 final remained to be a constant battle throughout the entire 22 lap race with the trio of pole sitter Jordan Boys and Victorian pair Jason Pringle and Adam Lindstrom all experiencing the race lead.

An incident for Rotax rankings front runner Troy Woolston ended his hopes of a podium, subsequently allowing Boys, Pringle and Lindstrom to pull away.

A late race pass by Pringle saw him take the race win ahead of Lindstrom and Boys with Mason Barbera and Travis Millar rounding out the top five.

Round seven and the final round of the 2014 Rotax Pro Tour takes place at Coffs Harbour, NSW from July 18-20.