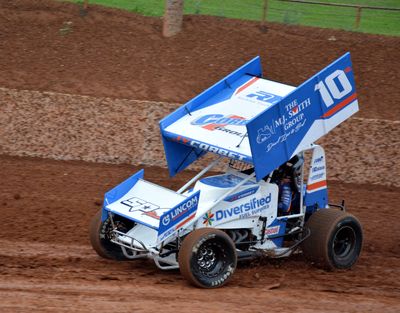 Despite being a late addition to the schedule, racing this Saturday night (November 13) has still attracted more than 100 competitor nominations for a variety-packed program headlined by round four of the East Coast Logistics Sprintcar Track Championship, along with round two of the TFH Midget Series. Also on the card will be Formula 500s, Lightning Sprints, Open B/Limited Sedans, Legend Cars and Formula 500 Juniors. Both the Sprintcar and Midget rounds have been scheduled to replace events lost to inclement weather on October 30, while the support categories will no doubt relish the opportunity afforded them to secure an extra outing at Queensland’s premier speedway venue.

There is no doubt that Luke Oldfield is the current performance benchmark in the ECL Track Championship as his form across the opening three rounds has been outstanding. Oldfield has accrued two wins and a third-place finish, but it is the way in which he has achieved these results that has been nothing short of spectacular. His wins in rounds one and three of the championship were concocted with the perfect combination of pace, patience and precision and, perhaps most impressive of all, is the fact that Oldfield has managed to combine these elements without sacrificing the spectacular style that has made him such a popular figure amongst fans.

Defending track champion Lachlan McHugh has, as expected, been in the thick of the action at each round and has been the only local to match Oldfield, finishing on the podium on two occasions. However, the previous round proved a nightmare for McHugh when he twice inverted the Leigh Smith Yachts Cool in turn two and subsequently failed to take part in the feature race, leaving fellow Gold Coaster Cody Maroske and Tasmania’s Jock Goodyer with the task of trying to tame Oldfield. With Goodyer, who finished second on that occasion and is the only other driver to have secured a feature race win at Archerfield so far this season, not amongst the starters this weekend, McHugh and Maroske face one less obstacle in their quest for success.

Of the remaining 20+ nominated competitors, there are several who have produced flashes of brilliance without the consistency needed to be a genuine threat for a place on the podium. Former track titleholder Aaron Kelly has been plenty quick but has endured some misfortune that has hampered his results, while the likes of Bryan Mann, Randy Morgan and Kevin Titman are yet to find the kind of form that has seen them consistently situated in close proximity to the top five in previous seasons. Recent rounds have seen the likes of Ryan Newton, Karl Hoffmans and Tim Farrell produce stirring performances that, if replicated with regularity, would most certainly see them secure a place on the podium.

It is been a really impressive start to the season from the Midget fraternity when it comes to competitor numbers and, if all 27 nominated drivers do make an appearance, it seems certain that there will an additional $1000 up for grabs in the feature race courtesy of the Bob Baker Encouragement Lucky Midget Draw. Given the weather-induced abandonment of round two, Charlie Brown remains the only feature race winner at Archerfield so far this season, leaving a lasting impression with his opening round effort that saw him round up and romp clear of expat Kiwi Michael Kendall, a five-time national champion. Kendall has since secured a win in Toowoomba and, joining these two in what seems certain to be a multi-car squabble for the podium positions will be some highly credentialed throttle stompers in the form of Brock Dean, Darren Vine, Rusty Whittaker, Brad Dawson and Scott Farmer, all of whom are feature race winners at Archerfield.

Meanwhile, a couple of Sprintcar competitors in Dylan Menz and Jayden Peacock are also amongst the Midget entries and it will be interesting to see if they can make any impression in a field that also includes several other potential spoilers in the likes of Cal Whatmore, Casey O’Connell, Nathan Mathers, Matt Hefford, Mitchell Rooke and Rob Stewart.

Although Andy Kimm has been the standout performer in Lightning Sprints so far this season in their events elsewhere, he faces a tough assignment to maintain his top dog status this weekend with Tyler Stralow, Scott Genrich, Jason Rae, Jim Gollagher and Darren Baldwin all likely to be very much in the mix come feature race time.

The decision to combine Open B and Limited Sedans has certainly been embraced by competitors with 19 cars nominated this weekend and the absence of Ben Harris from the entry list certainly opens up the field somewhat, with Aaron Buchanan and Ricky Price certainly expected to be in the thick of the action at the front of the parade.

Gates open at 3.00pm for online ticketholders, with early racing from 5.00pm and the main program, which will also feature Formula 500 Juniors and the second ever appearance from Legend Cars, getting underway at 6.00pm. For those unable to purchase tickets online, the ticket box will open from 4.00pm