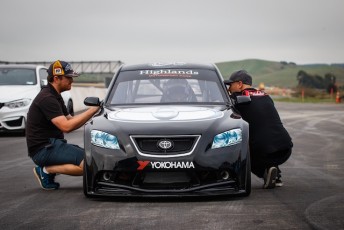 MEDIA RELEASE: Feedback from drivers – including Kiwi racing star Angus Fogg – participating in the two recent test days with the NZ Racing Cars has been very positive and bodes well for the November launch of the new motor racing series.

Sentch says the two test days added to the momentum that the new series is gaining.

“Our test day drivers were very enthusiastic about their time in the NZ Racing Cars test cars with several expressing serious interest in lining up for the new five round series,” Sentch says. “They have a range of backgrounds, from karting to various circuit racing classes, so it was great to see that the NZ Racing Car concept appeals across the range of competitors.

Among the test drivers was Greg Murphy’s teenage son Ronan, a kart racer who was accompanied by his grandfather Kevin Murphy at the test day.

Sentch notes: “For the guys testing at Hampton Downs, there was the added bonus of being amongst the first to experience the new section of track, so that got a lot of positive comment as well.”

Kiwi racing star Angus Fogg also tested the NZ Racing Car and is already looking at running two of the little racers, one for himself and one for a young driver.

Fogg says: “The build quality of these is excellent and for what they are, they’re very fast with a reasonable amount of power. These things are different, half like a motorbike and half like a kart with a roof over your head which I’ve always enjoyed. James Ward said to me your driving style suits these cars down to a T – you’ve got to get into them to make them sing.

“It’s not just another a one-make series, the NZ Racing Cars is something different and I’m looking forward to the genuine trans-Tasman aspect – it’s neat that the cars are truly identical, something that a few other classes should have thought more about.

“I’ve watched them race in Australia several times and was always impressed with the racing, how the whole package worked and they race at a lot of premium events. I’ve always said I’d like to go to Aussie to race one of these and now it’s closer to home.

“Overall, it looks pretty affordable and a lot of fun, and with Tony Quinn behind it, I can see the series happening. As in Australia, there looks to be a wide range of drivers in the series from old veterans like me to kids coming in from karting. I see it as a step for some people, a step that’s sort of missing in New Zealand.”

In terms of the NZ Racing Cars on track, Fogg says: “Because they’re little and light and not particularly good through the air, the racing’s always good. It’s a bit like old Mini racing, where you’ll get some drafting and some dive-bombing which makes good racing. You can’t do that in a big heavy car, well, you can try, but it doesn’t work. These are like angry mosquitos, they zap around, they’re cool, they lift a wheel, they’ve got some attitude and they’ve got the latest body shapes like the Camaro and Mustang – I’d be having a Mustang if I did one.”

Fogg sums up his test day experience: “I really enjoyed it and am looking at getting some mates together to do another test day. It gave me the old dry mouth and got my heart pumping. If you’re not smiling, it’s not worth it!”

Sentch says he continues to field calls from interested competitors. “We will certainly run more test days throughout the winter as demand dictates. Drivers can reach me via email – [email protected] – for more details.”

Sentch confirms eight NZ Racing Car chassis have already been built, ready for the New Zealand series when it starts in just over six months, and more are in production with the expectation that around 20 cars are likely to contest the inaugural NZ Racing Cars Championship.

An information pack is available on the series website, www.nzracingcars.co.nz, under the 2016 NRC Series menu option or can be requested by emailing [email protected] The new category can also be followed on Facebook.